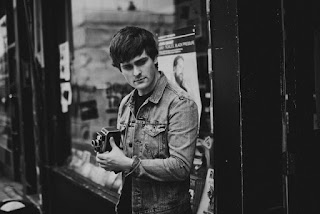 Londoner, Tom Speight, has now released his latest EP 'Little Love', and is also set to release his debut album later this year. Tom's previously enjoyed prominent success with his 2010 debut EP 'Willow Tree', though was forced to take time out due to medical issues, however his welcome return will see him collaborate with The Staves, Denai Moore, Clean Cut Kid and Benjamin Francis Leftwich. He's landed support slots for the likes of Ed Sheeran, Jake Bugg, Mumford & Sons and Fleet Foxes in the past and is now returning to perform extensively around the UK alongside Turin Brakes throughout February and March...

1. How old were you when you started getting involved in music and how?
I first started writing songs around the age 12 - it's been an infectious bug ever since! I don't really remember how it happened, it was just all I ever wanted to do. I have fond memories of listening to cassettes in my Mums car on repeat.

2. What is the most inspiring musical performance you've ever seen?
That's such a tough question... What comes to mind first though is seeing Damien Rice just after his first album came out at Brixton Academy. The dynamics of his songs and the chemistry between him and Lisa Hannifin has influenced my music ever since.

3. Who have you been listening to lately?
My top three records from last year were Sufjan Stevens, Tobias Jesso Jr. and the Ryan Adams live album. They just never seem to leave my record player.

1. You've supported some fantastic musicians in the past, but who would be your dream artist / band to tour with and why?
I would love to share a stage with Elton John. I think musically it would work and he seems like a lot of fun plus he is a legend!

2. What process did you go through creating your single 'Little Love' musically?
I wanted to write a song that represented a period of my life I wanted to say goodbye to... It felt like a reward for going through something quite difficult, if that makes sense when I finally finished that song.

3. Which is your favourite track from your EP 'Little Love' and why does it stand out to you?
My favourite at the moment is 'Something To Say' because it's probably the most positive song on the EP. I'm also really proud of 'Little Love' and the reaction it's getting.

If you could invent a chocolate bar, what would you call it and what would the main ingredients be?
Peanut butter all day! Everyday! As for chocolate bar names... Dr Nut? I'll stick to music I think!

'Little Love' EP Review:
Tom has created a perfectly crafted EP. 'Little Love' opens the release up on a steady track that grows into a catchy chorus, leaving me tapping my toes throughout. 'If I Belong' is stunningly emotive and honest, with harmonious vocals working incredibly well alongside the guitar. I found 'Something To Say' was very typical of the singer/songwriter genre, reminiscent of early Lewis Watson (definitely not a bad thing), and was pleased when Tom's songwriting ability shone through and push it outside of the norm. The EP closes with 'Green Eyes', another beautiful track with layered vocals and guitar complimenting each other and wonderful builds.
Overall, a fantastic EP, perfect to relaxing to in front of a fire or a sunset and really listening to and taking in, Tom's ability to create a narrative throughout a song and contrasting tracks with slower and steadier tones to upbeat, memorable melodies, but managing to incorporate honest and emotive lyrics to all.