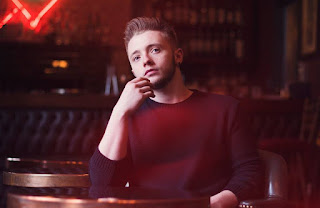 East London singer-songwriter, John Parry, has just released his self-produced EP 'Enough'. This marks the debut EP release from the 18-year-old, a former winner of the XLP Arts Showcase. He's performed at London's Lovebox and supported Fismoll at The Garage (London). These live performances and previously released tracks 'Dirty', 'Love Drunk Punch' and 'Druggie', have paved the way for his continuing ascent into the limelight as his fanbase also continues to grow. John Parry will only build upon that momentum, he's a brilliantly charismatic and incredibly talented young musician and a definite one to watch!

1. How old were you when you started getting involved in music and how?
Compared to a lot of people I found music quite late. When I was 14, I started playing guitar and wanted to be in some Green Day or Slip Knot mash-up band, but then I decided I wasn't about that life, at about 16, and I haven't looked back.

2. What is the most inspiring musical performances you've ever seen?
My good friend Charlie, at the time a 13 year old girl, had spinal surgery and got up on stage and performed one of her own songs - standing. Nothing will beat that.

3. Who have you been listening to lately?
Oasis, Ed Sheeran, and Justin Bieber is writing some bangers at the moment, and The Vamps... Only joking. I listen to music totally the opposite of mine for inspiration such as Slaves, Foals, Tame Impala and always have to throw some Arctic Monkeys and The Streets into the mix to be safe.

1. Where do you look to find influences and inspiration in the world?
Girls, alcohol and nights out. That's about it. But honestly though, the past couple of months I've been having some new experiences and I'm writing some more 'honest' music. I'm opening up my mind to other things and am able to be critical of myself rather than just writing songs about the girl who used to see her ex-boyfriend when we were going out at 17. Yeah, I haven't forgot. It still hurts.

2. Which track from your EP 'Enough', were you most excited / apprehensive for people to hear and why?
With 'Do' you can jump to conclusions when it's not put into context. If you hear 'Do' and you're shocked and jump to conclusions, message me on Facebook, 'John Parry', and I'll happily provide context.

3. What process did you go through writing 'Enough' and how did it differ to your previous releases?
I often write songs in ten minutes - without writing it down. If I remember it, it's catchy, so it's a good song. I wrote 'Enough' and forgot about it but luckily I recorded it. I lent my phone to someone and about six months later they sent me the recording I had done on my phone, saying it's the best song they had heard of mine. I listened to it and thought 'shit, how did I forget this'. I rewrote some of the lyrics and it was done.

Who would be your dream artist / band to collaborate with?
ABBA.

'Enough' EP Review:
'Enough' starts atmospheric and builds throughout into an energetic and erratic track; with steady paced drums, I really enjoy the use of snare, which is often overlooked and not used to this extent, and the guitar rounds off the song and compliments the other layers well. John's vocals are soulful highlighting his well crafted and to the point lyrics, the video is edited to work perfectly alongside the song, not only musically but also lyrically, helping bring the diary-like lyrics come to life. John Parry has created a unique sound which reverberates throughout all of his tracks and further into the world of music. If you like the style of The Streets and the music of Ben Howard or Jack Garratt, you're bound to love this guy. This is his debut release, which makes us excited for his future - he's another one to watch!