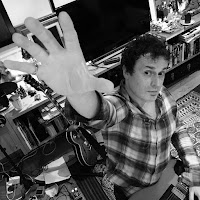 The Mining Co. is led by enigmatic London-based musician Michael Gallagher's voice and songwriting at the forefront. Creating a sound which brings the genres of americana, country and folk together. They've recently released their debut album 'Burning Sun & The Atomic Powers Within', combining the rustic shuffle of Gallagher's Irish roots and a subtle European heat having co-produced in Spain with Paco Loco. We caught up with Michael for a quick Q&A...

1. How old were you when you started getting involved in music and how?
15, started a short-lived heavy metal band, it was more about having big hair and wearing tons of makeup.

2. What is the most inspiring musical performance you've ever seen?
There have been three; Bruce Springsteen 1985 at Wembley, The Waterboys at Glastonbury 1986, At The Drive-In at the Astoria.

3. Who have you been listening to lately?
Nadia Reid, Benji Hughes, Joan Shelley, Jake Xerxes Fussell, The Righteous Brothers.

1. If you could tour any three countries, where would you choose and why?
Ireland - becucase of my Irish roots and in Irish culture, music comes first.
Japan - I always saw it on heavy metal albums as a kid and I love Bob Dylan's at Budokan (live) album.
America - always loved American culture from TV, films, clothes, music.

2. Do you feel that influences for your music comes from just experiences or do you find them in broader mediums of art too?
My influences are from art and music and when I'm feeling happy - that's when I write best, not when I'm blue.

3. Which track from your album 'Burning Sun & The Atomic Powers Within', did you enjoy creating the most and why?
Ballad of the Mining Company because I tried it upbeat with a big marching bass drum and cellos which sounded great, but preferred the quiet ambient version. I always wanted to write a protest song, and this is it.

Whose record collection would you most like to listen to?
My best friend John, who has everything from jazz, trad Irish, rock, pop, world, you name it, he has it. Ultra diverse and eclectic, and all on vinyl.

'Country Heart' Review:
'Country Heart' is a wonderful song; a steady lullaby-esque track with solemn and sultry tones. The guitars are underlined by strings, allowing the song to flow beautifully alongside Michael's sincere vocals and lyrics. This is one of those songs you can truly sit back and lose yourself in, a possibility which is carried onwards throughout the album.