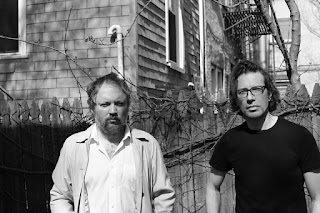 August Wells finished 2015 on a high note, supporting Glen Hansard at a sold out show at New York's Beacon Theatre, before returning to Ireland and Europe at the end of January for a number of dates. August Wells are Dublin native Ken Griffin and New York pianist John Rauchenberger who met in the middle of differing musical pasts to form a band. Their new single 'Here In The Wild', out in the UK today (22nd April), and is taken from the band's forthcoming second album 'Madness Is The Mercy'.

1. How old were you when you started getting involved in music and how?
I was 14 and in school, a friend of mine, Karl Jones, was in a band and I went to see them practice, I thought they were pretty awful, but I wanted to express myself. I used to paint and draw a lot, and write stories, but a band offered an immediate confrontation between ideas. You could alter the bands ideas by what you did. If I didn't like the music I could try and drag it vocally in a direction that changed it. At the centre of a lot of creativity I think is the desire to find yourself, your voice, true voice, and give it a life outside your head and for it to be ok. So I quite honestly was so bored by the music the band were playing I grabbed a mic and started singing, and that moment shaped the next 30 years of my life.

2. What is the most inspiring musical performance you've ever seen?
My old band Favourite Sons were playing a show in Kalamazoo. It was one of those horrible bookings, no promotion, no one knew we were playing. So the audience ended up being the Bartender and the guy who was opening for us. The bartender told us, oh there's a local act opening for you. The local man set up his keyboard in the middle of the stage, then went outside for a smoke and a beer. We shook hands and laughed about how no one was there, but at least he would have a respectable audience made up of the 5 members of our band and the bartender.
He was handsome and weathered and so I expected some handsome weather songs, maybe like a second rate Warren Zevon.
We took our seats out of respect for out fellow musician and expected very little. He wandered on and sat on his stool and began to stretch his fingers. He also began to hum quite loudly, we, the band, exchanged glances and smiles that meant our expectations were lowering even further. His hands hovered above the keys and finally he began to play. What followed for the next half an hour, I can honestly say, was maybe one of only 3 times in my life that I felt I was in the presence of greatness. It was some of the most accomplished playing of an instrument I had ever witnessed. He ended, we roared with laughter, and joy, and appreciation.
It turns out he wasn't a local musician, his name is Thollem McDonas, and he has played with some of the greatest musicians in the world.

3. Who have you been listening to lately?
Lately I have been doing something I have neglected to do for years. I am listening to old classic songs, standards, and learning how to play them. The reason being, I am hoping I can unlock some new approaches to writing. So I have learned, Moon River, Over The Rainbow, Blue Moon, Stormy Weather, Blue Skies, and a few more. Those songs have been played to death by some of the best and worst musicians alive. I just simply wanted to know how they worked, and why they have lasted, and if there is any common threads between them. Maybe, I should do an album of standards called LOW STANDARDS. The experience has been humbling and eye opening, like going back to school as an adult. So much time has past since some of these songs were written they seem other worldly, almost spooky. I am being careful to keep a safe distance from them too though.

2. How much has changed for you as a band between your debut album to your second?
I suppose the biggest difference has been that we recorded the first album 'A Living and A Dying Game' in our home studio, and we did all the tracks separately. Most of this new album 'Madness Is The Mercy' was recorded live with a group of musicians, and we use single takes for each song. Every note was arranged and rehearsed before we went near the studio.

3. What process did you go through creating 'Here In The Wild' and how much did it differ to the other tracks from your forthcoming album 'Madness Is The Mercy'?
'Here In The Wild' was the first song we recorded for the album. We heard back a live performance we did of the song and were surprised how complete it sounded. So we decided then that we would do as much of the album live, and in one take as we possibly could. 'Here In The Wild' is one live take, and I think two over dubs of a flute and an acoustic guitar.

'Here In The Wild' Review:
'Here In The Wild' is an all round beautiful song. Their vocals hold so much soul and emotion and with stunning piano accompanying, the layers create a wonderful base. Add in wonderful lyrics to tell a story and strings that slice through the track beautifully. It's a song full of warmth and feeling, and paves the way for the rest of their incredible album.