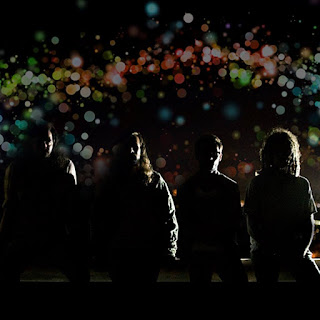 Critically acclaimed psychedelic bliss-rock band, Givers and Takers, have quickly catapulted to success with their unique blend of soul and experimental rock. The four-piece came together in Santa Barbara, CA, and consists of members, Zack Greenwald, Alan Krespan, Drew Bruchs and Mark Pollack. They've performed alongside Walk The Moon, !!! (Chk Chk Chk) and Alberta Cross, and now they're set to announce their forthcoming EP in the coming months and will be touring extensively this summer!

1. How old were you when you started getting involved in music and how?
Zack: I was 8 when I started playing music. I grew up a lover of R&B and Soul music, but I was a basketball player. Around the same time I decided not to play in college, a guitar wound up in my hand for the first time, and the rest is history.
Mark: I was in the local music store when I was 7 or 8, and remember being so drawn to the electric guitar. My parents wanted me to play piano first, so I started lessons and a year or two later got my first guitar.
Drew: I was about 6 years old when I first started playing music. I feel that music was my first language. Many of my earliest memories revolved around listening to music / being around musicians. My father and brother are both guitarists, so I gravitated to that instrument at first, but then quickly realised that I didn't want to be the third guitar player in the family. The bass seemed to naturally come my way a few months later.
Alan: I was 6 years old when I first decided I wanted to play guitar. My parents wanted me to play piano first to get familiarised with theory. A few years later, I was at a friend's house where there was multiple instruments, including a drum kit. I started banging away and felt the need to keep at it. I then started taking lessons until I got my first kit at the age of 12.

2. What is the most inspiring musical performance you've ever seen?
Zack: Easy question. My Morning Jacket at Red Rocks Amphitheatre.
Mark: Saw Brand New twice in April 2007 on tour with Kevin Devine and Manchester Orchestra. Those shows inspired me to pursue music.
Drew: Robert Randolph & the Family Band opening up for Eric Clapton.
Alan: MuteMath at The Satellite. It was a very intimate setting for such a successful band. They were so genuine, humble, and willing to answer any questions about their processes and gear.

3. Who have you been listening to lately?
We've been getting into the new Ray Lamontagne and Matt Corby albums, along with our staples - Foals, MuteMath (their newest album is SO hot), Glass Animals, Erykah Badu, Fleet Foxes... The list goes on and on...

1. Why / how did your name 'Givers & Takers' come about?
We picked the band name based on the constant, invariable balance of the universe. We like to look at topics from as many angles as possible. Our name always seemed to fit the spectrum of our sound.

2. You're set to tour throughout this summer, but which three countries would you most like to tour and why?
The UK - We have had a few people tell us over the years that our music would be well received over there, and we are itching to test that theory out. Many of our favourite bands/artists are British, as well, so we would like to tap into the soil of those influences.
Japan - It would be such a treat to tour in a place with such a different culture. No other country has more dedicated fans. We know how revered live music is in Japan, and would love to be a part of it.
Antartica - We have always wanted to play a show where the entire crowd is made up of ice.
4* - Texas

3. What process did you go through creating 'Strangers' and how did it differ to other tracks on your forthcoming EP?
'Strangers' was actually written quite a bit before all the other songs on this batch, so it differs most in that way. That song was slowly massaged out over time to become what it is today. Even the live version is still evolving. Our songs are never really done.

'Strangers' Review:
'Strangers' is a fantastic track! The prominent bass line highlights the smooth soulful vocals and slick guitars, which grow to an emotive and raw chorus, with a grittier feel to it. Gradually building and ending in a crescendo. I really love the combination of genres pulled together by Givers & Takers as they've created a unique sound that stands alone as pure brilliance. A great track!