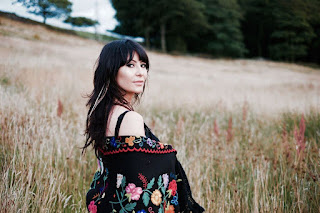 British / Columbian singer/songwriter, Vanessa Forero, has just released her self-produced debut EP 'From The Uproar'. After being selected in 2015 by Brit Award singer/songwriter Beth Orton to write and perform at her UK show, Forero decided to become her own artist and record her own distinctive indie/folk style with Latino influences. We caught up with Vanessa for a Q&A about all things music...

1. How old were you when you started getting involved in music and how?
I started playing music as soon as my Dad could sit me up at the piano so I grew up on this thing. I penned my first composition at age 9 (called my 'first encounter' - inspired by ET!) but I'd been improvising long before that, I just didn't have the tools to capture the music.

2. What is the most inspiring musical performance you've ever seen?
I'm gonna say Foy Vance. He was playing in a beautiful wooden barn and ended on 'Guiding Light'. It has this almost hymnal vamp with lyrics; 'When I need to get home, you're my guiding light, you're my guiding light.' He stripped it down to just voices - everyone's singing. The people outside the barn caught onto it, then the people in the stalls, then the tech guys, and even when Foy left we kept going, walking around the fam and singing this thing out into the night, it was so moving! A real powerful and uniting moment, like we were all plugged together by this little bit of music, and that seemed like a good illustration of what music really is for me. Brought it all home again.

3. Who have you been listening to lately?
I'm pretty bad at listening to new music, spend too much time playing with it, but Jack Garratt and Gavin James are on my recent searches and I have not been disappointed. Sufjan Stevens is a recent regular too for me.

1. Out of the instruments you play, which do you enjoy playing most and why?
Piano. It's not even my main instrument - it's my main language! I learned to play it at the same time I learned to talk, but even today the piano is my better way of communication for saying how I feel. It's also where I re-charge, it's my cave, my safe place, my therapist! Actually I think it might be my umbilical cord. Yummy.

2. Where do you tend to look / find inspiration, both musically and lyrically for your music?
Previously  to everything outside; planet earth, whatever makes a noise or just music that moves me. Recently - to everything inside; musically translating who I am as a person, my culture, my character, my leanings etc. I'm new to writing lyrics but the generally come from me talking to myself - pulling me out of something or pulling me into something new. Sometimes just my observations of this quirky little planet.

3. Which is your favourite track from your debut EP 'From The Uproar', and why does it stand out to you?
Probably 'Raven'. Raven was my superhero nickname given by a friend who was trying to pull me out of old Vanessa skin and into the skin of something greater than I presently was. With public singing being my greatest fear and coming to face it on my first stage last year, I had to go out on Raven wings! So that week I wrote this pep-talk song: 'Listen you Raven, see what you're made of...' and all on a high note. It gave me something to climb for anyway, and I survived! It all marked quite a moment for me because that was the start of me freeing all the song I've had buried under fear for years. Lyrics aside, the song just happened to provide great grounding to get quite Latino on production, so all round it really does feel the most 'me' song.

All time favourite musician?
I'm more in tune to composers than musicians, but one muso that comes to mind is the drummer Vinnie Colaluta. Sting used him a lot back in the day. He's technical but musical, sensitive but commanding, complex but communicable, just a true, TRUE musician. I LOVE bassist Pino Palladino too.

'From The Uproar EP' Review:
This release opens with 'Heaven Knows', a track that is led by beautiful guitar and is brilliantly folky. It's impossible not to hum along to and has a compellingly upbeat chorus, quite reminiscent of Angus & Julia Stone. The lead single from the EP 'Same Boat' follows next and is another cheerful track, with a fantastic indie style guitar riff and ukulele and guitar lines that come together really well, would be perfect for singing along to and would create an awesome atmosphere live.
'I'll Be Wrong Again' is a little slower, however it grows throughout with increasing layers and a wonderfully hopeful yet emotive tone.
'Raven' is possibly one of my favourite tracks from the EP, it's atmospheric and is a little more intense than the previous three. Strings, Spanish guitar and the percussion lead this song well, with a catchy and empowering chorus standing out. Closing the five-track release is 'Anhela' a beautiful bonus track, sung in Spanish and holding a stunningly haunting atmosphere. I got a little lost listening to this track and ended up with goosebumps. Really beautiful.
Overall, a truly incredible release; each track offers something new and different to the EP (and the wider world of music too). It really showcases the talent, knowledge and passion that Vanessa has for music. Enjoy!