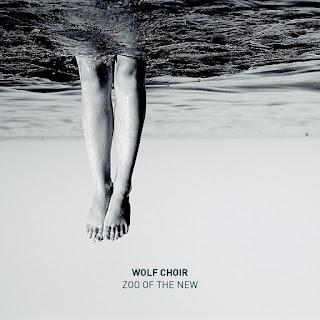 Wolf Choir are a young, Guildford-based band; comprised of Aram Bahmaie, Ed Guillaume-Smith, James Humphrys and Tom Hill. The four-piece are currently scattered across the country, studying and working in Birmingham, Guildford, Bristol and Plymouth and are still managing to reassemble in their bedrooms to write and record. Following their debut EP 'Mountains and Other Nice Things', 'Zoo of the New', finds them reborn, exploring more exciting sonic landscapes.

1. How old were you when you started getting involved in music and how?
Tom: I started to play classical piano when I was about 9 but I only really started to enjoy playing music when I learnt the guitar at 11. From then that has been my instrument of choice.
Ed: I was abnormally into playing the recorder when everyone starts learning. I had a Beatles book with a backing track which I loved playing along to. It was great.

2. What is the most inspiring musical performance you've ever seen?
Tom: Volcano Choir played at the Barbican Centre a few years back which was an amazing experience.
James: The most inspiring musical performance always changes each time for me. There's always something different I take from a performance, and want to try and incorporate into our music or performance. But one that stands out would be a recent one when I saw King Gizzard and The Lizard Wizard play in Bristol. Their energy on stage was incredible.
Ed: For me it would probably be either LCD Soundsytem at Brixton Academy, the first time I saw Arcade Fire on their 'Neon Bible' tour, or the two times I've been lucky enough to see Sufjan Stevens.

3. Who have you been listening to lately?
Aram: David Bowie - Backstar, Esperanza Spalding - Emily's D+Evolution, Beat Music - The Los Angeles Improvisations, All Joanna Newsom records, Deerhunter.
Tom: The War On Drugs, Polica, Slowdive...
James: Recently I've been listening to Honne, Rhye, Liss, this Norwegian band I found on SoundCloud called BLØSH. But a lot of funk like The Metres and Herbie Hancock.
Ed: No new releases recently apart from 'The Life of Pablo' and Grimes - 'Art Angels'. Otherwise been listening to a lot of DJ Shadow - 'Endtroducing...', Beach House, A Tribe Called Quest and M83.

1. Which country would you most like to tour and which two artists/bands would you want to tour with?
James: There's a few countries I'd like to tour. Germany and France would be cool. But we need to gig more here first... There's a band we're close with called Fossa. So that would be fun to tour with them one day.

2. What process did you go through creating 'Zoo of the New EP' and how much did it differ to 'Mountains and Other Nice Things'?
Aram: It differed hugely. Firstly, we are all two years older than when we did Mountains and Other Nice Things. We've all left school. We all live in different towns and cities. James and myself are both doing degrees in music, and we all have broader tastes in music than our 18-year-old selves. Ed joined the band as well, becoming a key collaborator. The music has so much more depth, in part due to his knowledge of synthesisers and sound design, but perhaps more importantly, he could see very clearly where we were going with the project and always assisted us in the best way possible. Of course we all had specific roles, but each of us were very open to constructive criticism, so we never arrived at a situation where I play a bass part, or Ed keys part, and that became the final product. There was very little ego. It's too small a project for ego. We enjoyed ourselves.
James: The main process didn't change a lot I feel, we left it for a while after Mountains and Other Nice Things. So in that time, as Aram said we'd all grown musically and our tastes obviously changed slightly. I feel we knew what we wanted it to sound like and we weren't as concerned about what people would think of it. There was also less pressure to release it, we allowed a lot of time to make sure it was where it could be. The arrival of Ed also changed the writing process and opened up new areas we now love exploring.

3. Amongst the band you also have a few solo projects, what always brings you back to Wolf Choir?
Aram: We're very good friends, and making music with your good friends is tremendous fun.
James: There are a few different projects for sure! Aram's off playing a load of bass with different bands, Ed is working on his project Mechajoy and I'm studying songwriting in Bristol and working towards releasing a new solo EP with that. So although we're all active in music in different places it's always nice coming back home to start on something new and fresh. I feel our different qualities help bring out the best in each other and we know how each of us likes to play and write so it's always good to combine talents. We'll never not play together!
Ed: As Aram mentioned, 'Zoo of the New' was my first adventure with Wolf Choir. I'd be a fan from the get-go and love 'Mountains and Other Nice Things'. When I came on board to work on ZotN, I'd moved away from making indie rock music for a while and had focused more on producing pop/electronic as part of Mechajoy. So making music with the band was a lovely mixture! It was such a fun process , the rest of the group are a pleasure to create with and I'm grateful to have been a part of it.

Whose record collection would you most like to listen to and why?
James: My friend recently watched a J Dilla documentary. He was telling me about the ridiculous number of records he had collected over time. He knew which records to find and use for different samples, which is coll and something, which also separates Zoo of the New from Mountains and Other Nice Things. So I guess I'd like to have a listen to his to try and listen out for what he would have looked for in the records. It's a skill!

'Zoo of the New EP' Review:
There's no denying this is a maturer and more eclectic sound from Wolf Choir. The EP opens with 'Helios'; a steady track that grows from beautiful guitars complimenting James' vocals, underlined with bass and keys, to intense, thrashing drums and cutting guitars, ending on a crescendo. 'Number 7' follows on brilliantly, offering a funk-infused bass throughout, the song is layered so well it, they all work seamlessly together. My favourite track from the release is 'So Much Blue, So Little Time', and I still haven't quite worked out why it stands out to me. It's a little fuzzy and whether they intended it to or not, the music seems to reflect the lyrics in an almost metaphorical way, and of course the drums throughout work incredibly well with the synths and guitars. The release is finished off with 'Catharsis', an fantastic track with infectious guitars and melody. It's bursting with creativity and the addition of spoken word from Maddalena pushes it out the box and on the edge of the band's usual style. Overall, a brilliant EP that shows indie rock and dream pop doesn't have to exclude musician's influences from other genres.