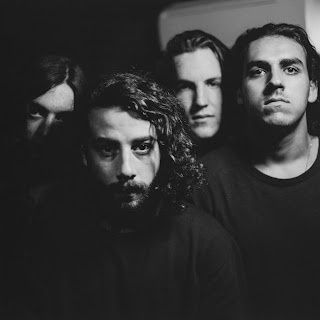 After the success of their debut EP, 'Waxen Myriad', in 2014; Brisbane band Twin Haus have now returned with their sophomore EP 'Nothing Lavish'. The four-piece spent most of 2015 writing for their latest release and now to celebrate are heading out on their biggest tour yet. Travelling around Australia for most of April and May, which they kicked off with a hometown show, are now heading across Queensland, New South Wales, Victoria and Western Australia. Hopefully, they'll venture across to the UK and Europe soon, as their stage presence make them a band that have to be seen to be believed!

'Nothing Lavish EP' Review:
It's not often you can truly appreciate a 10 minute track, however this EP is home to two of them and they're brilliant! The four track release opens with 'Synthetic Egg', which is understandably most people's favourite song from the EP. It's a dreamy track, with varying depths and intricate layers of horns and saxophone which really adds to the craft of the song. 'Self-Love' follows on well, has more of a psychedelic and intense rush of energy throughout. Whilst 'I Used To Think' holds a trippier vibe, and the vocals float over the top of the well crafted instrumental layers. The EP comes to a close with 'The Revue', stepping back into a dreamy pop track, slower in places, cutting and growing into a crescendo at the end, bringing the EP to a wonderful ending. Overall, a fantastic EP, four tracks that show what Twin Haus are all about and combining some great genres together into a creative mix of perfection.