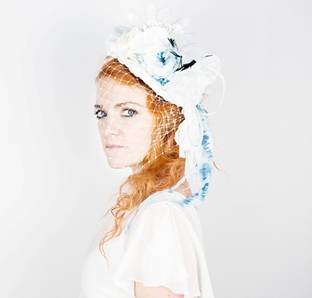 Bouche is the music of songwriter, double bass player and singer, Rebekah Bouche, accompanied by trumpet/flugelhorn and electric guitar, and occasionally featuring a mini string section of violin and viola. The trio, Rebekah, Joe Sharp and Nikos Ziarkas have been performing live for a year and a half building up a local fan base in London and taking their music as far afield as Italy and Germany. Performances include sets at Wilderness Festival and Secret Garden Party and an invite to support Van Morrison in March last year (2015), at Kensington clubb, Nell's. Now they've released their debut album 'So Long Solemn' and it's alternative jazz at it's best.

1. How old were you when you started getting involved in music and how?
I believe I entered the world screaming.

2. What is the most inspiring musical performance you've ever seen?
I don't think I could name any one performance. I never knew what my favourite colour was when I was a kid. I've been inspired by all kinds of different things at different times, and there are a lot of gigs that have stayed with me, and I'm sure many that have stuck around somewhere in my subconscious even if I don't remember them. I'm also very lucky to hear incredible live music several times a week in the venues where I play and hang out. As an artist you thrive off inspiration so if I didn't see the most inspiring performance I've ever seen yesterday then I should probably go out tonight.

3. Who have you been listening to lately?
The voices. So many voices.

1. You've performed in Italy, Germany and the UK, but which three countries would you most like to tour and why?
That's a really hard question. Back to that colour thing again. For the moment though the UK is definitely first on the list. We toured the album around some of the major cities last both, but in the autumn we're planning something a little more spectacular, closer to the show we put on in London for the launch.

2. Who influences you musically and what inspires your lyrically?
Musicians, and words.

3. Which track are you most excited / apprehensive for people to hear from your debut album 'So Long Solemn' and why?
The first one I guess; if they're listening to that then it's pretty exciting that they've decided to give the album a go, but they might hate it, and that makes me pretty apprehensive.

If you could invite any three people to a meal, who would you choose and why?
My Mum, my Dad and my other Dad. They haven't spoken for 20 years.

'Everything & Nothing All At Once' Review:
This track is a really fantastic alternative jazz song, the darkness of the music video reflects the mood and tone of the song perfectly too. Powerful vocals, showcasing Rebekah's range, glide over the double bass to create a sleepy and steady song. The darkness of the lyrics are also highlighted with the depth but simplicity of the instrumentation. A brilliant song full of emotion, a theme that runs throughout the rest of the album 'So Long Solemn'...

Everything & Nothing All At Once - Bouche (link)