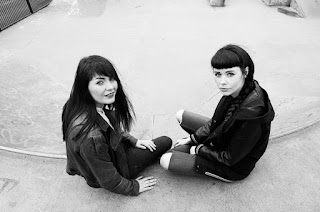 REWS are a young Irish / London based alternative rock duo, here to inspire. Consisting of songstress Shauna Tohill and beat-maker Collette Williams. Their last single ‘Death Yawn’ picked up support from the likes of Steve Lamacq, Radio X’s John Kennedy and Dan O’Connell and Amazing Radio’s Shell Zenner. Shauna has recently toured as guest vocalist with Snow Patrol and as bassist with Darwin Deez; whilst Collette is also a hugely talented vocalist and session musician (who can be seen drumming in Gabrielle Aplin’s ‘Sweet Nothing’ video). Now they’ve released their latest single ‘Shake Shake’ and are set to perform at The Great Escape festival this year amongst loads more (so be sure to check out their live dates!)

1. How old were you when you started getting involved in music and how?
Collette: My first recollection of being involved in music was singing solo at my church on Christmas Eve when I was eight! I was in choirs and vocal groups for years. After that, we had a drum kit brought in one day at my school and I instantly fell in love! I begged my Dad for drum lessons and he agreed, and used to take me to jam night at our local pub.
Shauna: From floating in the womb! Haha!! My parents were in a band and my mother was gigging whilst pregnant with me! As I grew up - my parents always encouraged my sisters and I to sing so we sometimes performed at some of their gigs and I started writing songs from a very young age with the idea of having a full on sister band! When I turned 13, my parents split up and I really realised then that music helped me to get through a lot of stuff. It really spoke to me and I realised I wanted to create music that did that for other people. I began initially playing drums in a metal band, then singing for another metal band and then I picked up the guitar (followed shortly by bass and piano) to accompany my songwriting and I haven't looked back since!

2. What is the most inspiring musical performance you've ever seen?
Collette: This is a difficult one! Firstly I would say a Masterclass I've been to rather than a gig, but it was Thomas Lang, my drumming idol! He just blew me away with his technical ability and speed and made me aspire to be the best drummer I can. Secondly, seeing Thirty Seconds To Mars at Reading Festival years ago, they performed 'This Is War' and it was just breathtakinly emotional having watched their 'Artifact' documentary and seeing all the hard work that went into the album.
Shauna: I agree with Collette - This is pretty difficult! Haha! One performance really stuck with me was when I saw Amanda Palmer performing in Belfast a few years ago - she had been run over by someone in Belfast and STILL DID THE GIG with her leg in a cast and it was AMAZING!! I actually wasn't a massive fan until I went to this - she totally blew me away with her talent, vision and her confidence in just being who she is.
Most recently though - St. Vincent - WOW! Saw her at Ivy Gardens last year in Dublin and I can still feel the hairs on the back of my neck! What an incredible talent!

3. Who have you been listening to lately?
Collette: Such an eclectic mix... Bring Me The Horizon (loving their latest album), PVRIS, the new Chase & Status ft. Slaves track, and a bit of Ludovico Einaudi when I need some chill out time!
Shauna: With Collette on this - very eclectic. I can't stop listening to Beck - Dreams at the moment! Brilliant song! I have recently discovered Honeyblood - Biro is a kick ass track! I'm also loving Pucifer, The Internet, Phantogram, PVRIS and Crosses.

1. If you could play a show anywhere, where would you choose and which artist / band would be your dream act to perform alongside?
Collette: I would love to play a show in Japan!! I think we would love the culture and fit right in over there. Sharing the stage with a band like Marmozets would be so much fun!
Shauna: Man! I agree with Japan! To be honest - I really want to play in as many countries as possible worldwide! Maybe South America would be my pick?! Dream artist to share the stage with in this moment would be between Deftones and Nine Inch Nails.

2. What process did you go through creating your latest single 'Shake Shake', both musically and visually?
Collette: Musically, this track was Shauna's vision which I identified with through the lyrics and energy. We wanted the video to communicate the physical effects that thoughts and feelings have on your body, making it 'Shake Shake' hence the crazy hula-hooping! We had so much filming it!
Shauna: Yep, this song was a pretty emotional process for me! I was inspired following a really hard break up! It's all about the emotional and mental debris in the aftermath where you are exploring and learning to build and destroy different aspects of who you are and what you previously thought about things. I want to thank Rocky O'Reilly and Peter McCauley who were involved in the recording process! Legends!
Visually we wanted to capture our energy as REWS but also to reederate what Collette has said - we wanted to be a little creative and add in elements that would reflect the turbulent times that people go through in these times - which was the hula-hooping!

3. Where do you gain inspiration and influences from whilst creating and performing your songs?
Collette: Personally, I take inspiration from things that have happened to me, day to day life, people I meet and everything in between! I try not to force the inspiration, rather let it hit me and carry me through the process so the song and performance is raw.
Shauna: I am really inspired by experiences and what happens every day, both good and bad. I love reading and hearing about what is going on in the world either in books, people's minds, conversations etc. I'm most inspired on the move - so whilst walking, on the train, on a plane, running... you name it.
During the writing process, I feel that it's so important to enter into the 'flow' where the songs just come together... it's a really beautiful moment. Performing, I just love to really connect with Collette on stage and really be in tune with each other and also being aware of the audience and how they are feeling. It's all about adapting and creating good vibes. I just love creating and performing!!!

'Shake Shake' Review:
This is a fantastically high energy, punk infused alternative rock song. With a catchy chorus, wonderful vocals to sing along to, infectious guitars, pulsing bass lines and foot-tapping, air drum worthy rhythms, this track has it all. 'Shake Shake' is one of my favourite songs of 2016 so far and I don't think it's going to get knocked from that position any time soon! Enjoy!