On Tuesday, I finally had a reason to venture back to my favourite venue, The Boileroom, and it was a great excuse too! Me and The Moon had their single launch for 'The Light' and it was a brilliant evening of local, live music.

Will Rowe-Parr kicked the night off with his smooth vocals and his original songs from his forthcoming EP. Managing to combine blues, indie pop and acoustic rock into a wonderful unique sound, alternating between acoustic and electric throughout the set.

Beach For Tigers were the one act I hadn't come across before, and I was excited to hear what they had to offer - and wasn't let down. They're a five-piece psychedelic rock band, with wonderfully ethereal guitars, strong and funky bass lines, more tight harmonies and a trumpet shining throughout. They pull elements from so many genres into psychedelic rock and each of their songs and have created a signature sound, whilst not being too similar within the set list. I was a big fan. 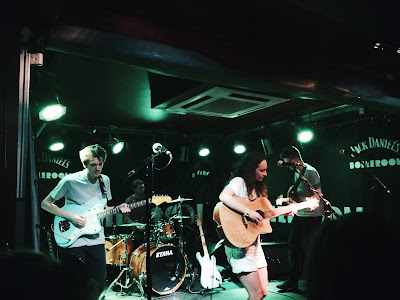 Then Me and The Moon headed on stage. They brought in a large and enthusiastic crowd that filled out The Boileroom. They kicked off their set perfectly with 'Hold On', taken from their debut EP, with their trademark sound of compelling guitar riffs, strong bass and rhythms, and of course strong vocals. It got the audience singing along to the chorus, and warmed them up for the rest of the set.
They played a few new songs, 'Against The Tide' is a brilliant track, again with infectious guitars and strong lead vocals, backed by Johnny, highlighting the song's lyrics. 'Blind' started more stripped back, with Tamara-Jane on acoustic guitar, building into stuttered layers and a drum beat that's impossible not to clap along to. 'Daydreaming' is very folky, holding a steady rhythm throughout and growing into yet another catchy chorus; cutting to a guitar solo courtesy of Johnny and gradually building the layers back up into a fantastic song. Yet another song full of fantastic harmonies and getting the crowd clapping along again.
After a few thank you's to the people who made their new single and accompanying music video possible, they introduced 'The Light'. This single is a brilliant follow up from their previous, 'Run With Wolves'. Starting stripped back and jumping into indie pop at it's best, memorable riffs and melodies, and empowering vocals, showcasing their range and harmonies as a band.

The Light - Me and The Moon (link)

They did a fierce cover of 'Til The End' by Lucy Rose,  Me and The Moon-ed it (and yes that's definitely a thing!) Producing a beautiful electronic soundscape that broke up their set of originals nicely. Another song from their debut EP 'Been A While' graced our ears, with a moodier tone, incredible instrumental breakdown and Johnny smashing it on guitar (again). They treated us to another new track, 'Get Away', which has a rockier intro, stunning group vocals, and a memorable melody.
Greeted with chants of 'one more song', Me and The Moon (obviously) closed with their title track from their previous release, 'Run With Wolves'. As it's their most known song, everyone was either singing, humming or clapping along, which left it stuck in my head for a fair few hours afterwards - it's still there, 24 hours later...
Overall, a fantastic evening, Me and The Moon did a fantastic job of creating a high energy performance on stage and atmosphere throughout the venue that brought their music to life. It's not often you can go to a gig now and have a quiet(ish) audience, but it was obvious that everyone was there to enjoy listening to and seeing them live, which shows how talented Alex, Johnny and Tamara-Jane really are! If you get a chance to see them live anytime soon, take it up, you won't be disappointed!

Run With Wolves - Me and The Moon (link)