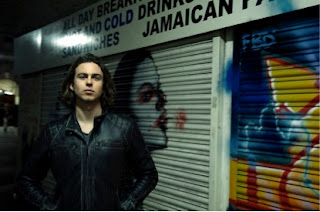 Born in Los Angeles to British parents, 22 year old singer/songwriter, Willow Robinson, is now residing in Hay-on-Wye. He's recently been signed, after playing his first ever gig, and has also released his debut EP 'Stones', which features a selection of self-produced tracks recorded in Willow's home studio in rural Wales. Having just supported Kula Shaker on tour, he could be set for a pretty exciting 2016.

1. How old were you when you started getting involved in music and how?
I started playing classical guitar and piano at a very young age, but it wasn't until around 11 years old that my parents bought me an electric guitar. It was at that point music took over my life and I knew exactly what I wanted to be.

2. What is the most inspiring musical performance you've ever seen?
I recently saw David Gilmour at the Albert Hall and it really blew my mind. Every single one of my senses were amazed, The music was complimented so well by this incredible light show, and it made me realise performing is about leaving people in awe and creating an experience they will never forget.

3. Who have you been listening to lately?
Lana Del Rey, Beck, John Mayer, Pink Floyd, Kula Shaker, Led Zep, the list goes on.

1. What inspires you lyrically and who influences you musically?
I read a lot, there is always inspiration in books. But mostly I write about experiences from my life, the best being ones that evoke extreme emotion, be it joy or sadness. It's impossible to pinpoint my musical influences as I find things that inspire me in almost all genres. All the great artists have left great things to draw from, but I try to be me as much as I can when I compose.

2. Which is your favourite track from your debut EP 'Stones', and why does it stand out to you?
I am very attached to 'My Burdened Mind' because it took me two years to record and perfect. I completed the full production and mix completely on my own, so it was really a labour of love. Within this song you also hear me finding my sound, it was like the curtains being parted for the first time. I first started recording it when I discovered I could sing, and it really shocked me how well it turned out.

3. You've just supported Kula Shaker on tour; which country would you most like to tour and who would be your dream act to perform alongside?
I really want to do a European tour and make a trip of it, stopping off at lots of beautiful places on the way. That's the way I like to tour, I hate just sitting in a car, wondering around a venue and seeing the inside of a hotel room. For me the journey is the destination. As far as my dream band to perform with, I know they're old, but The Rolling Stones. I imagine it would be seriously fun and the crowds they draw me insane, let's pretend I could perform with them in their heyday.

Favourite lyric you've ever written?
'All I have are these dreams and pictures in my head, I just hope, I get to put them down on paper before I'm dead.'

'Stones' Review:
'Stones' is a great track, with stunning guitar introducing the song to the listener. It's a classic blues infused song, with raw and emotive vocals from Willow. His skill for creating captivating lyrics, forces you to really listen and get lost. The song builds into a layered chorus, making it an incredibly powerful song, one that you really feel, and there's a fantastic guitar solo in there too... Enjoy!