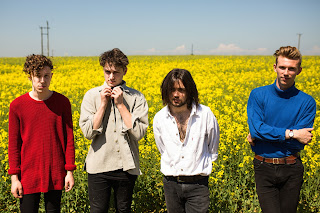 Marsicans are an emerging indie band from Leeds, England; all long time friends from school and Leeds' music scene, the current line up started sampling old synths, singing in harmony and writing songs together in 2014. Comprised of four very different individuals; James - a Beatles-obsessed singer, Oli - an art student turned guitarist, Rob - a 'bolder than your average' bassist, and Cale - a former samba band drummer. They've got a busy summer ahead with plenty of performances across the festival circuit, including Glastonbury, and September will see them release an EP...

'Far Away (Saudade)' Review:
This track is of those fantastic indie rock songs, perfect to see in the summer with. Reminiscent of Little Comets but still standing out as the 'Marsicans sound', there's a wealth of guitars, drums to tap along to, a strong bass line and a powerful chorus. It's bound to get stuck in your head and have you dancing along in no time!