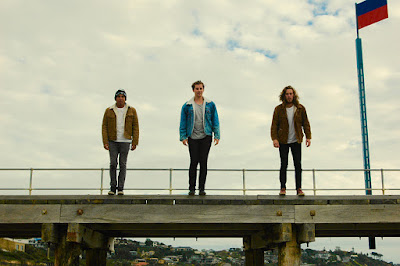 The Marlenes are a three-piece garage/indie/surf-pop band from the Mornington Peninsula, Australia, and formed in 2014. Following on from their 2015 release 'Jumpin' Cliff', a five song EP, which managed to get some airplay around the country with their single 'Cakewalk'. They've now released their debut album 'Crawl Out Your Window' and supported the release with a run of shows throughout Melbourne...

1. How old were you when you started getting involved in music and how?
We started a band when we were about 21-22 and started to write our own music when we couldn't decide on what covers to play.

2. What is the most inspiring musical performance you’ve ever been to?
The Hives with Howlin Pelle doing his thing.

3. Who have you been listening to lately?
The Beatles, The Murlocs and King Gizzard.

1. Which country would you most like to tour and which two artists/bands would you want to tour with?
Peru, with Paul Mccartney opening,  and Donald Dank & The Naughty Boys during the intermission.

2. When creating your ‘My Blue Eyes’, the first single from your album, was it a collective effort or did you have specific roles within the band?
It was recorded after a long day of beachcombing, and everyone played their specific roles, very well.

3. Which track from your forthcoming debut album ‘Crawl Out Your Window’ are you most apprehensive / excited for people to hear and why?
Lazy Saturdays. It is a trippy number and a bit different from what we usually play.

1. If you could have a pizza named after you, what would it be called and what would the toppings be?
The Cheesy Marlenie, it would consist of 7 different types of cheese, one from each continent.

'My Blue Eyes' Review:
This is a fantastic indie pop/rock track with infectious riffs and resonating guitars, a toe tapping rhythm and brilliant bass line adding to the layers. Unique and raw vocals bring the melody and lyrics to life, with a underlining rock 'n' roll blues vibe running throughout and harmonica to bring the song to an end. If you like this short energetic track, you're bound to love the rest of their 'Crawl Out Your Window' album!

My Blue Eyes - The Marlenes (link)