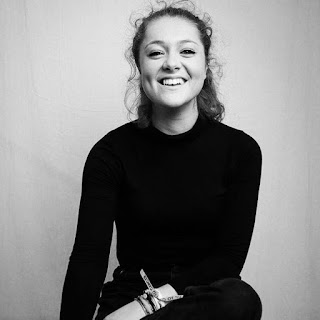 Polly Money is a 20 year old singer/songwriter from Cornwall and currently living in London. Her debut EP ''That Guy' EP' was recorded at Sony ATV studios and its release saw her perform in Paris to 80,000 people supporting Muse at the Stade de France. In 2014, Polly graduated with honours from London's Institute of Contemporary Music Performance and was rewarded with her dream gig the week after handing in her dissertation, Glastonbury. This led to continued support from Tom Robinson on 6Music and other performances for BBC Introducing at Port Eliot festival and The Little Orchard Cider and Music Festival. She's also since supported Gabrielle Aplin, Martha Reeves and the Vandellas, and Newton Faulkner, to name a few! Between regular live gigs and co-hosting 'The Goon Street Kids' a London based live music night, she's now released her newest 6 track EP 'The Adventures of the 90's Kid'...

1.  How old were you when you started getting involved in music and how?
I played piano from a young age and then around 7 I asked my parents for singing lessons. After that I picked up a guitar at 10 and I pretty much started writing straight away. Getting into music felt very natural and I managed to fall into it without really realising I was doing so. We always had a lot of music playing around the house and in the car and I would always improvise with vocal melodies over the top of songs which then led to writing my own songs I guess.

2. What is the most inspiring musical performance you’ve ever seen?
A performance that has definitely stuck with me since I was kid was watching Newton Faulkner at the Hall for Cornwall, it definitely kicked off my passion for guitar playing and I’ve since been lucky enough to play a couple of gigs with the man himself. More recently though I saw John Mayer at the 02 Arena in London and John Legend at Hammersmith Apollo, both of which where equally inspiring and epic shows.

3. Who have you been listening to lately?
I’ve been listening to quite a bit of Blood Orange and Bon Iver recently. I’ve known about Bon Iver for a while but never really got into his music, then a friend of mine played him in the car whilst we were on tour recently and I’ve since not stopped listening to ‘For Emma, Forever Ago’.

1. How much has changed between your debut EP 'The 'That Guy'' and your latest release 'The Adventures of The 90's Kid'?
I think generally growing up has played a big part in the difference between the two EP’s. I’m still very much a kid at heart but a lot can happen in 3 years. After playing a ton of gigs and really trying to soak up different styles of music it was cool to go be able to go into the studio with a better idea of what I wanted this record in particular to sound like. When I did ‘That Guy’ I was 17/18 and really only just discovering a style. Whereas some of the song’s on ‘The 90’s Kid’ are more personal and about moments I’ve experienced over the last few years. Some of those songs I’ve had kicking about for a while and some I finished in the studio just before we hit record. For me I think the more you write the more you learn how to convey a message in a song. I’ve learnt a lot from these EP’s so I’m looking forward to the next project.

2. Which three countries would you most like to tour and why?
America, UK (all of it) and Germany.
I’ve been to America a couple of times and I absolutely love it over there, so I reckon it would be a lot of fun to tour around. The Uk because it’s where this musical adventure started. I also went to Germany last year to gig and the welcome was so lovely so I want to go back and tour more for a longer period of time.

3. What process did you go through creating ‘It Would Be Ok’ and how did it differ from the other tracks from ‘The Adventures Of The 90’s Kid’?
'It Would Be Ok' was a song I wrote at college a few years ago quite quickly on the piano for a writing brief we had. I seriously didn’t think it was a song I would take forward until I sent it to a friend and he was really digging it. We then worked on the lyrics and structure, getting it to the point it is now and then took it into the studio. I always had quite a clear idea of how I wanted it to sound. It’s definitely more RnB than the others which is something I want to incorporate more with my style going forward.

'The Adventures of The 90's Kid' Review:
The EP opens with '5'5', a track that summarises Polly's sound and themes perfectly. It holds a catchy  melody, cleverly written and nostalgic lyrics and toe-tapping  rhythms, it's a song that's bound to get stuck in your head. 'Cinematic Calling' has a stunning electric guitar led intro, it starts slower with wonderful vocals and gradually builds into a hip hop beat led chorus. The lead single from the EP, 'It Would Be Ok', follows on well with smooth keys that grow into a gritty chorus straight out of the 90's charts, created with more catchy lyrics and melodies and a Justin Timberlake-esque vibe running throughout.
'Reigning Pink Bananas' is an energetic track that fits within the release well and cements Polly's sound. My favourite track from the release is 'Jimmy's Got A Gun', Polly's vocals are complimented by guitar and beats and the bass underlines the track and riffs are injected throughout. The EP is closed with 'Goodnight', a slower piano led ballad, full to the brim of honest and emotive lyrics. This is a powerful track and a contrast to the other tracks, however it still owns the Polly Money trademark sound with added dramatic drum beats and beeping to heart monitors, it's a clever piece of music. Overall, a brilliant EP, full of fun, honest, upbeat songs, and we've included it in our 12 Albums of 2016 so far, so it's got to be good!

It Would Be Ok - Polly Money (link)