Barn on the Farm, is perfect for finding new up and coming artists that you may not have heard of before, as well as the few new acts from the first two days of the festival, Sunday also pointed me in the direction of some new (and very talented) musicians. Lily Rendle-Moore was one of the artists, with a sound reminiscent of Duffy or Amy Winehouse and stunning acoustic guitar led songs she kicked Sunday off to a great start. Another lesser known act at the festival was sibling duo Ardyn (who you may remember from a recent Spotlight blog post...) They did a brilliant set on the Main Stage and it was great to finally see them perform live. 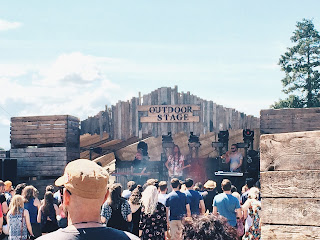 Our early afternoon on Sunday consisted of mainly chilling at the Outdoor stage, starting with Pleasure Beach, they reminded me a lot of Noah and the Whale, and I really enjoyed their energy and overall indie sound; it was perfect for the sunny day that we were lucky to have, and even better live. Having heard a lot of good things about Prose but having never listened to them before, we headed to the Main Stage to see them do their thing. Well, let's put it this way, I came home and have since listened to all of their songs a good few times and will definitely be getting their album. They clearly enjoyed what they were performing, they got people singing along and their songs are brilliant written with thought-provoking verses and infectiously memorable choruses. If you like the Streets or Plan B, you'll love Prose.

Home Of The Brave - Prose (link)

Tom Walker was next and his set was definitely a highlight from the whole weekend for me. With a set up similar to Jack Garratt, vocals reminiscent of Gavin James with a bit more punch and an overall sound that left me taken aback and excited to hear more. We had another walk about and enjoyed listening to a couple of songs from Hidden Charms when we gravitated back to the Outdoor Stage.

The Amazons were also really great and brought a huge energy to the stage. Frustratingly we only managed to catch the last song and a half of Dan Owen's, but what we did hear was incredible, he was able to show a softer, mellower side to his music and then go all out blues with strong harmonica, guitar and some box, it was quite something!

Easily one of my biggest highlights from the whole weekend was getting to see Fickle Friends on the main stage. I missed them earlier this year on tour and have been really enjoying their songs 'Swim' and 'Say No More', so was excited to see them for the first time. I think they're now on my list for best bands live, their stage presence and commitment (Jack was ill and still put in 100%) was incredible, and that meant their live set just brought their upbeat indie pop music to life.

Continuing on the indie route and getting a little rockier, we headed back to the Outdoor Stage and enjoyed High Tyde's set. It was clear that everyone else enjoyed it too, there was even a mosh pit, I'm not sure how, but it happened... Eliza and the Bear were on the Main Stage after and of course, we made sure we didn't miss them, it was a good set, and 'Friends' got a loud cheer and singalong.

When I found out Dagny was performing at Barn on the Farm, I made a mental note to make sure I saw her, having featured Dagny two years ago and still not managing to see her live, I thought this was my perfect opportunity! It was a great set full of upbeat pop songs and she definitely knew how to keep the crowd captive with catchy melodies to hum and dance along to. Next to the Wooden Barn Stage was the mystery act... Hudson Taylor, one live and one on FaceTime (Harry broke his leg...) with guests, Gabrielle Aplin and Hannah Grace. It was a good set, full of well known songs and everyone sang along to 'I Don't Know', which seemed to also get stuck in many people's head as during the evening you could hear it being faintly hummed in most corners of the farm.

The evening started becoming mellower and chilled out when Frances took to the Main Stage and completely owned it! She performed my two favourite songs of hers, 'Grow' and 'Don't Worry About Me', as well as her other original songs and very nearly left me with a tear in my eye. It really says something about a musician's music when they leave people speechless and just watching and listening in awe (and silence). Frances has a wonderful talent for telling stories through her music and her whole set was compelling and emotive.

Don't Worry About Me - Frances (link)

We wandered back to the Wooden Barn Stage for my most anticipated sets of the whole weekend. Ry X. The creator of one of my favourite songs 'Berlin' and after promising my friends we'd leave 'when I know what the next song is...' turned into two more, when he performed 'Berlin' and 'Sweat' arguably his best two songs in the middle of his set. The silence that surrounded the Wooden Barn Atage during his stage added to the ethereal atmosphere he created with his stunning music and soundscapes. Definitely a set that will stay with me forever.

To bring Barn on the Farm 2016 to a close, who else but Jack Garratt?! An incredible hour and 15 minutes of inspiring and atmospherically intense music. Nothing will quite beat feeling the bass in your chest and singing along at the top of your lungs and dancing your heart out to this year's most promising musician. Even when his technology faulted, he carried on as if nothing happened and covered S Club 7, The Fresh Prince of Bel Air, and his infamous mash up of Justin Timberlake and Craig David, later also covering Spice Girls after realising everyone he'd covered the wrong 90's/00's pop group... It was a fun, energetic, atmospheric experience and I think Jack summed up his thank you speech pretty well, not only is it Josh and the Barn on the Farm organisers, volunteers and musicians that make it the best independent festival, it's the family of music lovers that go year in and year out. 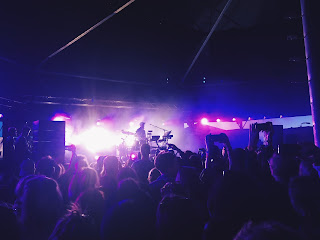