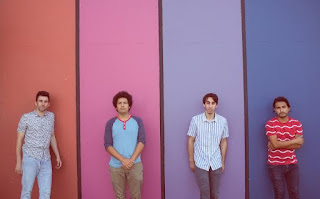 Southern California based four-piece, CAPTIONS., are an indie rock band consisting of John Figueroa, Joshua Zacarias, Marcus Paquini, and Adam Gangi. Their latest single 'Bearfights' is the first taken from their debut full length album 'ITERATIONS'. They've been compared to the likes of Real Estate and Band of Horses and are headed for exciting things!

1. How old were you when you started getting involved in music and how?
John: I took piano lessons from the age of 9 to about 13 or 14, but had no interest in it at all, I just wanted to get my hands on a guitar and learn every Zeppelin and Cream song, which I finally did the following year. I first started writing songs with Adam about a year after we had graduated high school and the initial idea for CAPTIONS. was birthed out of those jam sessions.
Josh: I was 6 years old when my Dad face me my first drum lesson. I couldn't get the beat down and I wanted to stop so I could go back outside and ride my bike or whatever kids did before 'smartphones' were in existence. My dad didn't allow that so I cried a bit. Anyway, I got back on the kit and eventually got the beat down. It felt amazing and I knew right then that I wanted to play music forever. That's my story and I'm sticking to it.

2. What is the most inspiring musical performance you've ever seen?
John: It'd have to be a three-way tie, and all are amazing for different reasons that are probably a little too deep to even get into, but the three acts were Radiohead, Flying Lotus, and Tame Impala.
Josh: That's a tough one, but I'm gonna go with Manu Chao at The Shrine (in the expo hall). I was probably 15 or 16 years old. I felt a connection with everyone there, and I didn't know that was possible to do with music.

3. Who have you been listening to lately?
John: KAYTRANADA, James Blake, Vondelpark, and Haitus Kaiyote have been in steady rotation for me.
Josh: Porter. Death Grips. Omar Rodriguez Lopez. Adan, Xavi & Los Imanes. Tool (I went back in time with this one).

1. How did you become 'CAPTIONS.'?
John: Adam and I went to high school together, and began writing about a year after we graduated. The group went through a few variations before we became the formation that we are today. We met Marcus after gigging with another band he was playing in at the time, and became a member after our original bassist left for the military. Josh came into the fray when he answered a craigslist ad we posted when our drummer moved up North. Within the first five minutes of meeting him, I knew he'd be the perfect fit.

2. Which continent would you most like to tour and why?
John: Without a doubt Europe.
Josh: South America..... because of the food.

3. What process did you go through creating 'Bearfights' and how much did it differ from the other tracks on your debut LP 'Iterations'?
John: Like all of the songs on this album, there was a previous version or two of Bearfights that we were playing before we met Jacob and Leif. Once we got in the studio, the collections of songs we had written over the years were completely transformed and came together to become a cohesive album.

'Bearfights' Review:
This is the third single from CAPTIONS. debut album and I feel like each track has surpassed the previous. 'Bearfights' is a brilliant song that combines the best bits of shoe gaze and indie rock with dream pop and fuses them to create this wonderful trademark sound. A catchy rhythm, glimmering guitar and synths and vocals that skip over the top but manage to melt into the cracks perfectly too. Listen to this one and get ready to tap and hum along...