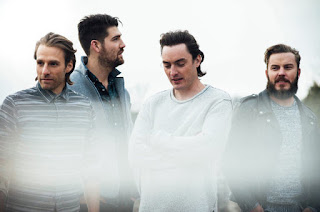 Civil Twilight, originally from South Africa, and now Nashville based, (are / have just) released an acoustic rendition of their album ‘Story of an Immigrant’.  It’s been one year since the release of the original record and the band has been busy. Following appearances at Bonnaroo and Firefly this summer, as well as a headline tour over July, and a handful of shows with Andrew McMahon and the Wilderness; they’re also supporting Nothing But Thieves this autumn. The future is bright and exciting for these guys.

1. How old were you when you started getting involved in music and how?
I started playing when I was about 13-14. I was asked to join the band cause nobody wanted to sing or play bass. I didn't like singing all that much, so when I was about 16 I started getting serious about bass and wanted to be the world's greatest bass player. Songwriting and a love of performing came much later on.

2. What is the most inspiring musical performance you've ever seen?
Gosh, I've had the privilege of seeing some incredible acts. So, that's a tough one. I remember seeing Abdullah Ibrahim and the Cape Town orchestra play when I was about 17 and that was incredibly inspiring. I also remember when we'd just moved to the states, I went to see this band that I didn't know anything about called Muse. Just the three of them on stage, during the Absolution tour. It was mind blowing, and I spent my last dollars on a ticket for the following night.

1. How did you guys become 'Civil Twilight'?
We've gone through a lot of names. But for some reason, we'd found ourselves in a predicament one night. I can't remember the circumstances surrounding it, but we needed a name before the morning. Andrew and I had, and have, a few pilots in the family, so we thought to look up aviation terms and that was the first one that popped up. So we took it and ran... or flew, should I say. Ha. Very close to the ground though.

2. You're heading out on tour with Nothing But Thieves in the autumn, but who would be your two dream acts to tour with and why?
Radiohead would be terrifying. And The Band, if they were still around.

3. Which is your favourite track from your acoustic album and why?
I liked the way the Billy Idol cover turned out. We actually met him a few days after the release and he was great. A true gentleman. 'Story of an Immigrant' turned out cool too, I thought.

A movie you can watch over and over again?
Dumb and Dumber. Classic.

'Story Of An Immigrant' (Acoustic Album) Review:
Every single track on this album is a beautiful addition to the original album. You hear a separate emotive side to every song and they all hold a stunning tone and atmosphere of their own. It's genuinely hard to pick three top tracks from the release to highlight and suggest you listen to, so if you get a chance it really is worth sitting down of an evening and truly listening to the album, taking every beat and note in. 'Holy Dove' is a popular track stream wise, so it would make sense to point that track out, and the title track 'Story Of An Immigrant' is a favourite amongst the band and listeners too, and I think my personal current favourite is 'Letters From The Sky' for the lyrical emotiveness and vocal (as well as instrumental) rawness and overall empowering atmosphere. However, I'm sure by tomorrow, that will have changed yet again!