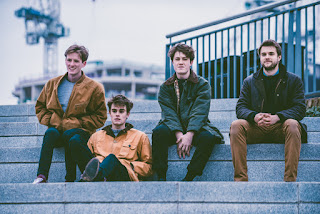 The Tin Pigeons formed at school in 2011, comprised of Fraser (guitar/lead vocals), George (banjo/vocals/percussion), Doug (guitar/vocals), Tom (bass/vocals), and Benedict (percussion). They've developed a unique and exciting brand of pop music, which has seen the East-Midlands five-piece appear at Secret Garden Party, Boardmasters, Lost Village, Barn on the Farm and Y Not Festival, as well as the taking to the BBC Introducing stage at Reading & Leeds this year. These guys are the indie-folk band to watch right now.

General Questions: 1. How old were you when you started getting involved in music and how? When we were all teenagers. I think it's the same for a lot of a lot of bands; it was just something to do at lunch time and free periods at school. 2. What is the most inspiring musical performance you’ve ever seen? Very hard to say... Saw Edward Sharpe and the Magnetic Zeros a few years ago and they were just amazing. Sometimes you see a great band or artist and it's almost depressing because it makes you question everything you're doing, but they created such an inclusive and positive atmosphere as well as doing an incredible set. It might be a virtue of having loads of people on stage... 3. Who have you been listening to lately? Just whatever comes, really. Flyte, Fickle Friends, Nathaniel Rateliff, Port Isla, Clean Cut Kid. Really enjoying the new Bon Iver stuff. 3 Qs for The Tin Pigeons: 1. How did the name ‘The Tin Pigeons’ come about? Oujia board. 2. You’ve performed at a string of festivals this season, but which would be your dream festival to perform at, alongside whom and why? We'd love to play a big stage at Glastonbury ,it would be amazing to tick that off the list! And yeh, maybe a support slot for a supergroup made up of Kanye West, members of the Wurzles, Right Said Fred and Dolly Parton? I'd take that. I'd take that very much. 3. Which track from your latest EP ‘Sparks’ did you most enjoy creating and how much did the process differ to the other two tracks on the release? Definitely "Sparks", the title track. Of the three, it was the only one to be written in the studio, based around riffs we were jamming with between takes for another song (much to our producer's chagrin). It made the whole process feel a lot fresher and naturally we were so pleased with it that we made it the lead song on the EP. Random Q: 1. Any pre-gig superstitions / traditions? We tried yoga once but Fraser was nearly asphyxiated by his unitard.

'Sparks' EP Review:
These guys have created an infectious indie pop EP that is brilliant from the opening note to the very last. The title track 'Sparks' opens the release with a folk singed indie pop theme throughout, smooth layered vocals and a wonderful breakdown that slowly builds back into the upbeat tempo that makes you want to get up and dance. 'Sirens' follows on, building with steady drums, warm vocals, and guitar into a wonderful track. There's a real honest and charming feel to this track in particular, but can also be found intertwined amongst the other tracks from the release too. The EP closes with 'What Would You Say', another fantastic upbeat track that's impossible not to sing along to. The bass line compliments the drums and guitars and banjo that skip over the top. The ultimate festival sing along track from the EP (to be honest, they'd all be pretty phenomenal live with the audience singing along I'm sure...)