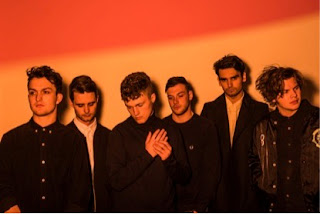 The British six-piece are back with their much anticipated four track EP 'One. Two. Three. Four'. Tommy (vocals), Jack (guitar), Joe G (guitar), Joe L (bass), Harry (keys), and Sam (drums) have taken a huge leap with this release and are also set to head out on a five date UK tour in October to support the EP. Produced in a converted chapel by rising UK producer JJ Mitchell and mixed by Raudhri Cushnan, it's a solid departure from their well received 2015 debut 'Don't Wait Til Tomorrow' and sees the Cheltenham alternative pop band take control with their sound...

General Questions: 1. How old were you when you started getting involved in music and how?
Most of us started in bands around the age of 16/17, playing small hometown shows every other week to a handful of mates. I think only Harry (Keys) was introduced into music from an early age, his dad being an incredible Jazz pianist.
2. What is the most inspiring musical performance you’ve ever seen?
I think I don’t have a definitive answer to this question, although I can honestly say that I’m constantly inspired in some shape or form by every artist I’ve ever seen live. From seeing a young band live at a local show to seeing Stevie Wonder at Glastonbury in 2010, I can always take away something from watching an artists performance.
3. Who have you been listening to lately?
I found a gem of an album in a band I’d never thought I’d be into; Bear’s Den's recent record ‘Red Earth & Pouring Rain’ is an all rounder in terms of what I look for in an album. Each song compliments the last and it oozes class and conviction. 3 Qs for Young Kato: 1. You're heading out on a five date tour across the UK in October, but which three countries would you most like to tour and why?
I think it must be every band’s dream to break America and tour big venues across the USA, it’s certainly mine. I think our band is definitely ready for that challenge, when it comes we will take the opportunity with both hands.
After our debut album was released last year, Tower Records in Japan featured us as their ‘Band of the Month’ which was a great honour. I would love to travel and see how much of an impact, however big or small that month did for YK over there.
Honestly, we would travel to the ends of the earth to play a show if it meant our band could play in front of a new crowd, who are into their music and eager to have a great time.
2. This EP is the start of the next chapter of Young Kato, what has been the biggest change between your debut ‘Don’t Wait ‘Til Tomorrow’ and this release?
We took ourselves away for around half a year to write as much as we can. We didn’t have an agenda or a specific way we wanted to write/sound, it was an incredibly natural process. The biggest change would be the maturity in our song writing, we’ve learnt so much over the past 4 years and are incredibly proud of who we are today.
3. Which track from your forthcoming EP ‘One. Two. Three. Four’ is your favourite and why does it stand out to you?
We all have our own favourite tune from the 4 track EP. Personally my favourite is track 3 ‘Sweet Desire’ as I believe it is the best song myself and Joe G from the band have written to date. Each song from the EP stands out in its own right, we feel we’ve created something that sounds like no other band around at this moment in time.

Random Q: 1. Favourite pizza topping?
Everything and anything as long as its pizza! Excluding olives and pineapples.

'One. Two. Three. Four' Review:
Young Kato are back and they're heading for even bigger things with this release. Reminiscent of the 80's music scene and full of catchy upbeat instrumental layers, I'm excited to hear what's next from these guys. It's an incredibly memorable track and one that should be getting a lot more recognition, it's raw and honest lyrics are brought to life by Tommy's fantastic vocals and backed by a fantastic combination of guitars, bass and keys, kept steady by a groovy beat too. Their forthcoming EP is definitely something to get excited about.