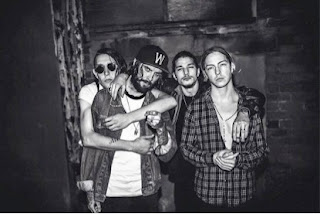 The Hunna are a four-piece indie rock band, hailing from Hertfordshire, England. Ryan (vocals/guitar), Dan (guitar), Jermain (bass), and Jack (drums) released their debut single 'Bonfires' and it's b-side 'She's Casual' in October 2015 and have since built not only a local following but a worldwide one. They've spent most of 2016 in the studio recording their debut album '100', which has now been released, and sees them head out on tour with Jimmy Eat World, The Struts, Night Riots and The Shelters...

'100' Album Review:
The Hunna are easily one of the most exciting indie rock bands of 2016 and this debut album proves why. Opening with their fantastic single 'Bonfire' and the infectious chorus that will have everyone singing and dancing along (easily one of my current favourite songs). Whilst the majority of their tracks are well layered and full of energy, 'Sycamore Tree' stands out as a slightly slower and steadier emotive track showing another side to the boys music. Another highlight of the album for me is 'Piece By Piece' a track that has hints of indie pop seeping in throughout. Overall, a brilliant album that deserves the hype it's getting (plus some), to also be able to listen through and have each song flow from one to the next is quite something - a brilliant release from the start of the process to the end.