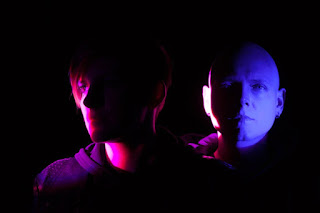 Based out of Oxford, Mississippi, And The Echo, is a project born out of a mutual love of ambient, electronic pop between Winn McElroy and Morgan Pennington. Beginning in March 2014, a 45 was released towards the end of that same year, and EP followed in Spring 2016, and now the duo are back with a self-titled album and a tour on the horizon...

1. How old were you when you started getting involved in music and how?
Morgan: I have been into music since I was a child.  The only movies I watched were old musicals like Hello Dolly, The king and I, and My Fair Lady etc.  Plus the Disney movies back in the the day were all musicals so I know I could sing every word to every old Disney Movie!

2. What is the most inspiring musical performance you’ve ever seen?
Morgan: The most inspiring was definitely this band called Lucius.  I had the opportunity to see them in a pretty intimate venue.  They have a magic about them that will leave you feeling inspired to create.  I ran out of the venue feeling like I could write lyrics that could change the world haha!

1. How did you become ‘And The Echo’ and what is the best and worst thing about being an independent band?
We began working on the Morgan Pennington "Wolves" EP with Winn as producer and that quickly evolved into And The Echo.
Best: No limitations.
Worst: We literally do everything ourselves. Writing, recording, mixing, driving, artwork, merch design, website, social media, lighting design.... The list can go on. It's extremely tiring, but well worth it in the end.

2. Who influences you musically and what inspires you lyrically?
Winn: I guess if I had to list musical influences, it would include Hans Zimmer, Danny Elfman,  and John Carpenter with a little Depeche Mode for good measure.
Morgan: Life. Literally anything and everything.

1. If you could only listen to three albums for a year, which would you choose and why?
Winn: Run the Jewels "Vol. 2", John Carpenter "Prince of Darkness" soundtrack, and Duran Duran "The Greatest" because you know.... It has a lot of my favorites, and, well, It's Duran Duran.
Morgan: Lucius, "Wildewoman."  Phantogram, "Voices."  Stranger Things, "Vol 1" soundtrack.

'And The Echo' Album Review:
This album is a fantastic showcase of Winn and Morgan's electronic indie pop from start to finish. Full of stuttered synths, brilliant beats, and layered vocals from Morgan. Listening to the album is like stepping into the heart of electronic music and being surrounded by all the best bits of the genre. 'Okinawa', 'The Parade', and 'Year Three' are my current favourite three tracks, they all offer something different and I think they really show the differing sides of the release. There's an intense energy that comes to a dark head in the closing track 'Year Three'. Overall, eight brilliant tracks in their own right, coming together to become a fantastic album. And The Echo have done a good job in creating a sound and really sticking to it.

The Parade - And The Echo (link)