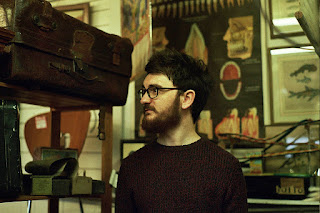 Jacko Hooper is a Brighton based singer/songwriter and has just released his second EP 'After The Storm'. This release follows his acclaimed debut EP 'For You', after which he took some time out to catch his breath. So far he's supported such artists as James Bay, Chet Faker, Amber Run, SOAK, Frances, and James Blunt and being part of the 'YouTube Generation', Jacko's YouTube account has raked up over half a million views and counting. Jacko hosts and curates Brighton's most successful acoustic night 'Folklore' which is a monthly celebration of the countries best singer/songwriters, and has seen recent surprise sets from Gabrielle Aplin, Hudson Taylor and Amber Run...

1. How old were you when you started getting involved in music and how?
I was around 12 or 13 years old. I always used to write poems, as long as I can remember. It became a natural transition to turn these to melody.

2. What is the most inspiring musical performance you've ever seen?
‘Say it To Me Now’ by Glen Hansard, at ‘The Den’. You can find it on YouTube. To see a man with one guitar portray such emotion and to own the stage like that was one of the most inspiring moments for me. It truly made me want and crave to be able to make others have that emotional reaction from my music.

3. Who have you been listening to lately?
Lisa Hannigans new record is beautiful. Been giving that a spin this morning. Also just bought James Vincent McMorrows new album on vinyl and my goodness it’s brilliant. I love all of his albums and they’re all so different, a true songwriter.
Also been listening to Ry X because his record Is simply flawless…

1. How did your acoustic night 'Folklore' first come about and how has it grown to what it is now?
Folklore began as a monthly night where I wanted to be able to put on some of the amazing local acts in Brighton in an environment they would enjoy and has developed into a bigger night with more elements to it. Having hosted stages at festivals, released video sessions and become a boutique record label in it’s own right.
I think Folklore’s biggest strength has always been the acts that are booked. Word of mouth has been strong over the last two years since it’s birth because people want to play it, they see the quality of artists playing and it’s something that other people want to be involved with. We also have a growing, loyal following of people who come to our events.

2. You've supported a growing list of incredible artists and bands, but who would be your dream act to support and why?
Yeah I’ve been lucky to support some of my favourite acts and a host of established names like Chet Faker, James Bay, Moddi, Russian Red, James Blunt and many others.  I think two of the names I mentioned earlier would be incredible. James Vincent McMorrow or Glen Hansard… I’m a big fan of Ben Howard as well. To share the stage with him would be great.

3. Which track from your EP 'After The Storm' did you enjoy creating the most and how did the process differ to the other three tracks?
I think probably the first track ‘Time Will Tell Us Enough’ as it took a long time to get right and involved me working with producer Josh Trinnaman in a very different way.  It was also one of the first songs I started writing on keys so it felt nice that it made it onto the record and is a direction I’ll definitely be exploring more in later releases.

Go to song on a sunny day?
The Isley Brothers – Summer Breeze. (That guitar tone, come on).

'After The Storm' EP Review:
'Time Will Tell Us Enough' starts the EP off brilliantly, it opens with an almost haunting piano melody, with addition of Jacko's warm vocals. Building layers of harmonised vocals and percussion and growing progressively into a powerful and raw crescendo. 'Closer' is the latest song from the release to be accompanied by a music video and is currently my favourite from the EP. The chorus is memorable and the lyrics are emotive throughout and the electric guitar and percussion instrumentals seem to perfectly convey that emotion too. 'Now Or Never' begins with a stunning guitar instrumental and slowly builds with a steady beat, this track is one of those songs that's just really good and you can never work out why, despite listening to it over and over again. The release comes to a close with 'Words & Fears', a soft song with wonderful instrumentation and vocals intertwined from beginning to end, including a fantastic electric guitar solo placed in the middle. Jacko Hooper has managed to collate a wonderful group of musicians to help create the sound on this EP and bring his music to life in such a fantastic way. He truly is one to watch.