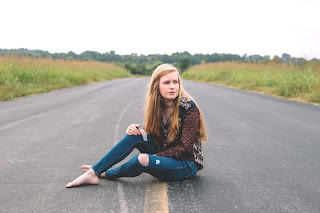 Katie Buxton is an indie folk singer/songwriter originally from Philadelphia, Pennsylvania, and now based out of Nashville, Tennessee. In 2012, she was chosen as the finalist in the Sing for the Trees Songwriting Contest with her song 'The World Moves By'. The summer of 2013 saw Katie attend the Berklee Five Week Performance Program where she ended as a finalist in the Songwriting Showcase and received mentorship from Melissa Ferrick and Sally Taylor, daughter of James Taylor. Adding to her songwriting accomplishments, she was later chosen as a finalist in the 2016 American Songwriting Awards with her song 'Painted Hearts'. Katie's debut EP 'From Songbirds' was released in March 2016 and now her new single 'You Flew' has been released and is already making waves.

1. How old were you when you started getting involved in music and how?
I've honestly been singing forever, basically since before I could talk, so to me that didn't really start at any specific time and it's just sort of always been. But I picked up the guitar and wrote my first song around age 12, and that was the most definitive beginning for me with music. I'm not sure what made me sit down and write that first song but it was the start of a really beautiful journey.

2. What is the most inspiring musical performance you’ve ever seen?
There have been so many performances I've seen that have been so inspiring, but one that comes to mind is Lorde's show at the Grand Ole Opry. To see a teenager not only fill that venue but have everyone in the palm of her hand with nothing but a mic and a lightshow was incredible. I think she as an artist is super inspiring in general because she is so unapologetically her. Those are my favorite kinds of artists and people.
3. Who have you been listening to lately?
I just found out about Corey Harper recently and have been listening to him a lot. Also a lot of Jon Bellion, both his new and older stuff. I think he's incredible and his writing style as well as just the things he chooses to write about are so awesome and unique.

1. Who influences you musically and what inspires you lyrically?
I have a ton of people who influence me musically and they're all so different. I love Trevor Hall, Allen Stone, and Matt Corby to name a few; they all have a very soulful sound but in totally individual ways. That's something that's important to me - music with soul. There are so many ways to communicate honest, raw emotion through sound and these artists all do it so well.
Lyrically, I find myself writing about all kinds of things and I'm inspired by people I meet and experiences I have, as well as perspectives other than my own.

2. What process did you go through creating ‘You Flew’, both musically and visually?
Usually when I write it's a little bit different every time, but for You Flew it was just a really natural flow. The music and lyrics came simultaneously and it was a really easy song to write because it's such an emotionally charged one. I had all these metaphors in my head and sort of piled them together. I'm big on imagery and with this song I felt like it was especially appropriate.

3. Which song from your debut EP ‘From Songbirds’ is your current favourite and why does it stand out to you?
I think my favorite from the EP would have to be Painted Hearts. I wrote that song around a Native American chant I heard years ago, so it's definitely one of the most unique songs I have and is really special to me - I've always had a really strong connection to that culture and it's a song that just seemed to come from thin air.
Random Q:

1. Whose record collection would you most like to listen to and why?
That's tough! Any big name musician who has been super influential and successful, really - I'd be so curious to know what inspires an artist who so many people look up to. Like Paul McCartney, who are his favorite artists? Or Bob Dylan, who are his favorite songwriters? I'd love to know what catches their attention.

'You Flew' Review:
'You Flew' is a stunning song, led by gentle guitar as Katie's vocals smoothly float over the top. It's a truly beautiful indie folk track, reminiscent of acts like Joseph or Billie Marten, both musically and lyrically an intricately wonderful sound and story. Katie Buxton is a talented singer/songwriter which is clearly showcased in not only this single, but also in her previous EP release, 'From Songbirds. I'm already looking forward to whatever Katie's next project is!