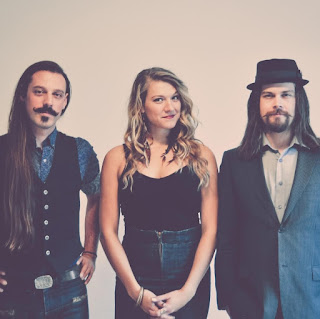 Red Moon Road, formed in 2012 by Daniel Jordan (vocals, guitar, mandolin), Sheena Rattai (vocals, percussion, keys), and Daniel Peloquin-Hopfner (vocals, mandolin, banjo, guitar, keys). The Winnipeg folk trio began their path towards their latest album 'Sorrows and Glories' with a shattered leg, a cancelled tour and a long 2000km trip home. Now fully healed and returned from a year of extensive and adventure filled touring across seven countries in Europe and North America, they release their third album. We caught up with Daniel Jordan for a Q&A...

1. How old were you when you started getting involved in music and how?
Music has been apart of our lives for many years.  Both Daniel PH and Sheena took classical piano lessons as children, but differed greatly in experience after that.  Sheena grew up singing gospel music in the Church, and when she met Daniel J in university was studying opera at school, and singing R’n’B in underground clubs at night.  DPH meanwhile, was playing drums in a heavy metal French-Canadian prog-rock band with his brothers!  Meanwhile, I grew up on the music of the Beatles and Led Zepplin, but went to university to study jazz, which is where I met Sheena.  I guess we ended up playing folk because we tried everything else!

2. What is the most inspiring musical performance you’ve ever seen?
For me it would be any of the “Tragically Hip” (one of Canada’s most popular bands, but relatively unknown in the rest of the world) concerts.  Gord Downie is a captivating and utterly insane performer.  For DPH it was a tiny little French Canadian club back in Winnipeg (which is a hub of incredible musicians), and he recalls the solo of one Darren Savard (look him up, Canadian Country Music Award Guitar player of the year 4 years running), who is AMAZING, but in DPH’s words, “I watched him leap off the cliff of his abilities and soar to something transcendent, and no one but he and I, who made eye contact just after, even realized it.  It was a breakthrough.”  And, while this sounds incredibly local-centric, for Sheena it was the CD release show of also-hometown hero’s “The Bros. Landreth”’s Joey Landreth acoustic encore.  It was “so honest and broken and what I want to evoke on stage”.

3. Who have you been listening to lately?
Sheen: Plants and Animals and Lucius
DPH: Moulette (from Bristol) and Jason Isabelle
Daniel J: Punch Brothers and Royal Canoe

1. You’re on a UK tour, but which country would you most like to tour and why?
Hmmm.  Well, we love England! But it would be pretty cool to get up to the Scandinavian countries or down to Austrailia.

2. Where do you usually look for songwriting inspiration and has this changed over the past four years since you formed?
Lots of our writing is inspired by our family, our home and history, but we’ve travelled so extensively since forming, and heard so much incredible music, that our experiences have shaped all of our writing.

3. Which is your favourite track from your album ‘Sorrows and Glories’ and why does it stand out to you?
Thats like trying to pick a favourite child BUT, the opening track “Beauty in these Broken Bones” is a total outlier in that it’s a choir, acappella, and showcases Sheena at the height of her vocal ability, and that is saying something.  Check out the live video to see what we mean.

'Beauty In These Broken Bones' Review:
'Beauty In These Broken Bones' is an incredibly powerful song, Sheena's soulful vocals carry the melody backed by both the Daniel's deep and atmospheric vocals. Layered up with claps and stomps this becomes a pretty awe-inspiring performance, there's so much meaning and emotion flooding the lyrics and this brought to life perfectly by Red Moon Road. With this song in mind, add in stunning guitar and strings, the wonderful sounds of banjo and mandolin and percussion and piano thrown in for good measure, this album is a soul filled folk release that's bound to capture anyone's attention...