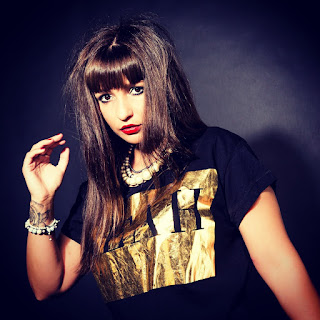 In her former life Rosie was the eponymous front woman and driving force of indie-art three piece, Rosie & The Goldbug. Defiantly basing the band firmly out of their native Cornwall, Rosie has collaborated and toured all over Europe and the US with the likes of Cyndi Lauper, Brett Anderson, Carl Barat, Shakespeare's Sisters, and Pete Went of Fall Out Boy. Her forthcoming self-titled album was recorded in Cornwall, the first single 'Stop Believing' was released earlier this year and now she follows up with 'Don't Wait' and 'Charlotte's Song', a third single, is set to be released soon too...

1. How old were you when you started getting involved in music and how?
I started playing the piano when I was very young because my sister was such a good player and I wanted to copy her. I played piano and sang throughout my childhood and teenage years. It was a natural progression to want to continue into adulthood.
2. What is the most inspiring musical performance you’ve ever seen?
I saw Patti Smith at Brixton academy and it blew my mind. She was so intense. I was such a fan that I cried for most of the performance because I was so inspired. I was right at the front and she did keep looking at me - I think because I had tears rolling down my face!
3. Who have you been listening to lately?
Hopelessness by Anhoni. It's addictive.
3 Qs for Rosie:

1. What has been the best and worst thing about going solo compared to working with your previous band ‘Rosie & The Goldbug’?
The best thing is that I can work on my music at anytime. I don't have to wait to rehearse with the band to finalise how songs are going to go. The worst thing is, I can't hide behind a persona so I would feel more exposed if I got a bad review, or felt something negative.
2. You’ve previously toured all over Europe and the US with some big names, but where would you most like to perform and alongside whom?
I've always wanted to play main stage Glasto and appear on Jools Holland..... I wouldn't be fussy who else would be playing. It would be a life long achievement.

3. Which track from your debut solo album are you most excited / apprehensive about people hearing and why?
I would have to be 'Charlotte's Song' because it's so personal about loosing my best friend last year. It's very sad but I think it’s also soothing, especially for anyone who has lost someone close. I'm pleased to have captured some of her essence in a song that will always be with me.
Random Q:

'Don't Wait' Review:
'Don't Wait' is a punchy pop track, with a dark undertone, it encapsulates Rosie's sound perfectly and introduces listeners to her unique approach to music, giving them a taster of what they're likely to hear on her forthcoming album. Memorable melodies, vocals gliding over layers of warm piano, growing with striking beats and added synths throughout. It's a short and sweet song, forcing the listener to replay the song a few more times...