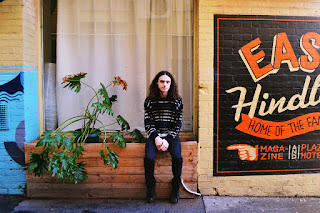 After performing for several years in various different bands and musical acts, Josh Begbie moved in with a close, life-long friend and musical collaborator if his. Over the six, broke months he lived there, Begbie worked on creating new tunes that eventuated into his first release, ‘Riddles’. ‘Bottles on the Floor’ is the first single from the three-track EP release…

1. How old were you when you started getting involved in music and how?
I first picked up a guitar in grade 1, but I didn’t really start getting into it heaps until 4th or 5th grade, then I started singing at the age of 15 or 16 maybe. And I guess I was always just a huge music fan. I just loved everything about it, except the theory that I didn’t understand.

2. What is the most inspiring musical performance you've ever seen?
I’m not really sure. Maybe Pearl Jam, just because of Eddie Vedder’s personage. Or perhaps Rammstein. They set a guy on fire.

3. Who have you been listening to lately?
Queens of the Stone Age and Courtney Barnett.

1. What have you found to be the biggest creative difference of working in various bands and musical acts compared to working entirely by yourself?
Having total control is probably the biggest difference. Writing in bands you always have people to bounce ideas off of, when I write by myself I sort of have to try pick it apart by myself.

2. Who influences you musically and what inspires you lyrically?
My band's sax player Dylan influences me quite a bit musically, because he seems to have a plethora of old-school bangers engrained in his memory. He always plays Supertramp or The Fifth Dimension or Dire Straits when we hang out. Some of it's pretty strange music, but I do find a lot of interesting ideas in their song. And, lyrically, I'd say the weather influences me a lot. My lyrics also seem to inherit a lot of the vocabulary of whatever book I'm ready at the time.

3. Which track from your EP 'Riddles' is your current favourite and why does it stand out to you?
I'd say the last track 'Harm'. Just because I think it's the most interesting.

'Riddles EP' Review:
'Bottles On The Floor' can be best described as a funky indie track with a psychedelic twist (managing to reflect the theme of the song being a reflection on the use of psychedelics as a route to self-growth). Begbie has managed to create a chill track that still manages to be upbeat enough to groove to. 'Liquid Death Star' has a bigger focus on strings / synths and would quite easily fit into a soundtrack release. Whilst the closing track 'Harm' is a slower, stripped back track and has a darker tone throughout. The EP brings together three varying tracks, all with a stylistically Begbie sound, if you're a fan of bands like Gorillaz and Arctic Monkeys, you're gonna love this release.

Bottles On The Floor - Begbie (link)