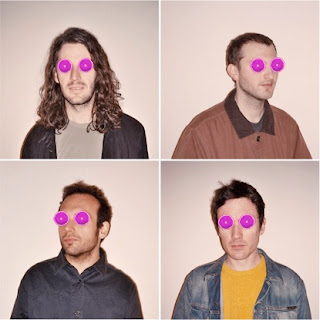 Cairobi are a headily eclectic globe-crossing four piece of Giorgio Poti (vocals, guitars), Alessandro Marrosu (bass), Salvador Garza (keys) and Aurelien Bernard (drums). Their music reflects their various backgrounds from Italy and Mexico via France, and has received support from the likes of 6Music and Huw Stephens at Radio 1. They released their debut self-titled album on 16th September, which will be available in January 2017 here. 2016 has been a big year for Cairobi having performed at Secret Garden Party 2017, and headlining London's Birthdays on 25th July. Following up their 2014 EP 'Distant Fire', this album was written in Berlin, and was recorded between Berlin, London, Rome and New York...

1. How old were you when you started getting involved in music and how?
In Italy between age 10 and 13 music education in school consists in learning the recorder, an instrument I always found so horrendous in sound, that I actually learned to appreciate it later in life from a noise/satanic point of view (especially when 20 children play it simultaneously). So music classes where not something I enjoyed back then, and I found reading music particularly boring. I had a technique though, I would wait for the other kids to play the notes they were reading and imitate their sounds, so I would’t have to worry about learning the pentagram. But my teacher said that was wrong, that playing by ear was bad, that I had to read the notes, and if I could’t do that it probably meant music was not for me. So we agreed that I was hopeless, and I would be excused to not play at all. Life went on easily and recorderlessly for two years, but when a new teacher arrived she said I would have to learn the recorder like all the other kids. I panicked. I said I could play the guitar and asked if I could do that instead. It was’t true, but my brother could, so I figured he could teach me a couple of chords. He did, and that became my favourite thing to do in the world. It still is.

2. What is the most inspiring musical performance you've ever seen?
I’m a big fan of Micachu And The Shapes (now Good Sad Happy Bad). I saw them play in Berlin last year and they were unbelievable. They have produced some of the most effective and moving melodies I have ever heard.

3. Who have you been listening to lately?
I really enjoyed the new “The Comet Is Coming” record “Channel The Spirits”. Also I have had a big crash on Telepath for the last couple of months, especially one record called “アンタラ通信”, then I have had some Flaming Lips in my ears recently, some Vasco Rossi, and a record called “Ruth is Stranger then Richard” by Robert Wyatt.

1. You've been performing live across the UK over the summer, but where would be your dream venue to perform and why?
I don’t really have a dream venue. Just as long as the sound is good, the people are nice and the vibe is right any place can be my dream venue.

2. Which track from your self-titled debut album are you most excited / apprehensive about people hearing?


I tend to get more attached to slower/quiter songs, there is one called “No Better Ending” that I really like.

3. What process did you go through creating 'Lupo', was it a collective effort or did you have specific roles within the band?
Lupo was an old song of ours. It had a different arrangement, which we really didn’t like, so we had chucked the whole thing. One day at rehearsal we started playing it, almost as a joke, but after an initial laugh we all agreed that we liked the song, and that it might have worked with a different arrangement. So we started trying things out on the spot, until some kind of primitive version of what we have today came up and we developed that.

'Lupo' Review:
Released with a complementary trippy and psychedelic music video, this song is just that. 'Lupo' is made up of a steady beat, shimmering guitars, funky bass lines and dreamy vocals coating the track perfectly. Their self titled debut album follows with the trademark sound they've created, intertwining vocals with their other instruments flawlessly, 'Gristly Words' is a perfect example of this. It's math pop meets psych rock, it's fresh and exciting - these guys are a band to watch!