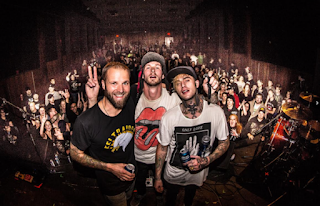 Two times Grammy nominated act, Highly Suspect, are about to release their sophomore album, 'The Boy Who Died Wolf' (18th November). Founded by twin brothers, Rich and Ryan Meyer, and their best friend Johnny Stevens, the Brooklyn based trio are making huge waves in the music world. Their previous release 'Mister Asylum' was released in July 2015 to critical praise from FADER, Consequence Of Sound, Rolling Stone and many more. Since then, they've been on the road tirelessly as a headliner and opening for acts like Catfish and the Bottlemen and The Struts, as well as taking on festivals around the world.

'The Boy Who Died Wolf' Album Review:
It's easy to understand on first listen why there is such a big buzz around this album and the incredibly talented three-piece behind it. 'Wolf' is my favourite track from the release, with cuts and builds throughout, smashing but steady drums, a gritty bass line, shining guitars and synths and stand out vocals. 'My Name Is Human' is another great track, with a bigger sound, faster pace and filled with even more angst. This contrasts the generally stripped back and slower sound of 'Little One', but this just shows how much of a range there is on this album and how much ground Highly Suspect can cover. One thing this album highlights is their capability to write honest lyrics with infectious melodies and powerful choruses. This is a brilliant release from the first note to the last and anyone will be able to find their own favourite track, that stands out to them.