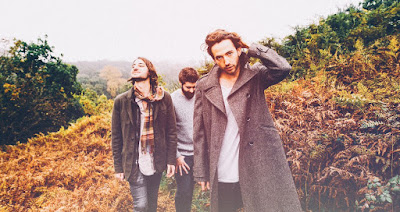 Passport To Stockholm return with a new sound, a new line up and a brand new single, 'Shooting Stars'. Since the release of last summer's debut EP 'All At Once' the band have been touring heavily, and their track 'Better Days' made it into the Top 10 most viral UK Spotify list. Barny (vocals), Telmo (guitars), and Henri (synths/beats) have recently reached 1 million streams on Spotify, as well as countless BBC Introducing 'track of the day' spots, and have just finished a 10 date UK tour supporting Canadian artist Ben Caplan.

'Shooting Stars' Review:
'Shooting Stars' is definitely a step in a different direction for Passport To Stockholm, but a refreshing one. It's got a heavier focus on electronica and carries a little more punch than previous songs, this is indie pop at it's best. This song pushes Passport To Stockholm up there with the likes of Walking On Cars and The Tin Pigeons, and deserve to be soaring up the charts. 'Shooting Stars' has a bigger sound and I can only imagine what their live presence and evolved into now - it was incredible before, it's only going to be getting even better from here on out. I'm already looking forward to their next release, if this is anything to go by, it's definitely something to get excited about!