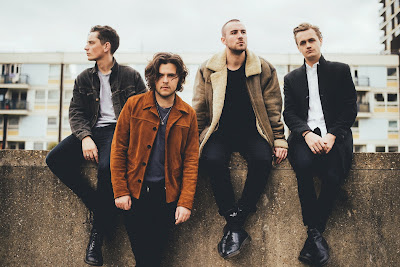 Amber Run are a four-piece indie band originally from Nottingham, UK. Joe Keogh, Henry Wyeth, Tomas Sperring and Will Jones have had a busy year. They've released their second album, 'For A Moment, I Was Lost', toured the UK twice, played some of the biggest festival in Europe, released an acoustic EP in September and are now heading out on their first ever European tour. We caught up with Joe for a quick chat...

1. Europe is your next tour destination, which country are you most looking forward to visiting and why?
Amsterdam will be great - it sold out after like a week on sale... But all the shows will be amazing - we've never played our own show in any of these cities. Really pleased we can play in all these countries!

2. Your latest EP is an acoustic release, what made you decide to go down the acoustic route and what difference do you think it makes to the tracks?
We wanted to try something different. For years we had run away from the acoustic thing - as we felt we'd been pigeon holed before our first record came out. But now we are seeing it as an interesting challenge. It's all about the quality of individual takes and making really conscious decisions in terms of instrumentation. Dressing up the songs in a different way proved actually to be really fun.

3. February saw your tour the UK, and Summer saw you play some big festival across Europe; what's been your favourite performance this year?
We played our first ever show in Edinburgh - that turned out to be quite the party - as well as Dublin a few days later. Barn on the Farm festival in the summer is always a highlight as well.

4. 'For A Moment, I Was Lost' was released earlier this year, and now you're touring, what does the rest of 2017 have in store for you and how do you intend on spending 2018?
We want to release another record. We are feeling really inspired and ready to jump back into it all.

5. If you could invent a pizza, what would be on it and what would you call it?
People get really angry with me - but I love margarita pizza. Get some beautiful buffalo mozzarella cheese or burrata on top of an unreal tomato sauce and sourdough base. Call it the not so plain Jane. Fuck yeah. I'm salivating.

'Acoustic EP' Review:
The EP opens with a fantastic cover of Maggie Rogers' 'Alaska'. Stripping the track back to just a guitar and vocals really allows the listener to focus on the lyrics, the harmonies are stunning and it's impossible not to press the repeat button as soon as it's finished.
'No Answers' follows, a beautiful version of the track, which originally appeared on 'For A Moment, I Was Lost'. The instrumentation is almost haunting and there's a beautiful vulnerability to Joe's vocals. This continues into 'Fickle Game', also originally from the band's latest album, with the addition of backing harmonies, whilst listening to this one you can imagine how incredible it would be live. '(Your Love Keeps Lifting Me) Higher and Higher' finishes the EP off perfectly. It's a powerful and emotive cover. I'm a huge fan of this release, Amber Run never fail to impress.