I'd never heard of Coastguard Studio, and was pleasantly surprised to see it was a independent, locally run venue. It was easy to get to and parking wasn't too far away. The venue was intimate and cosy, the staff friendly and accommodating. 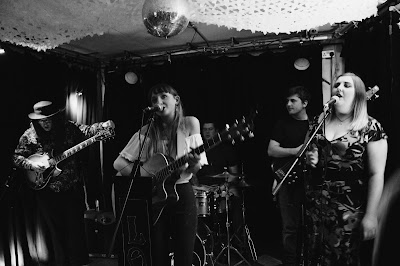 We walked in and were instantly greeted by Megan and her guitarist Charles, and pointed through a door to where Waif and Stray had just started their set. Waif and Stray are a folk/roots four-piece from Southsea. They combined moments of gritty folk with americana and softer folk, they kept the audience entertained with foot tapping beats, funky guitar and bass, and wonderful stories in their lyrics, bought to life by Caz and Sam's vocals. They finished with 'Girls Just Wanna Have Fun', it was energetic, fun a perfect way to finish their set.

There was a short change over, Me and The Moon took to the stage, they had gained two more band members for the evening, a new bass player and a keys player. This added to the bigger sound and larger focus on electronica intertwined with their indie folk sound. Their set was formed of the same catchy riffs and hooks they've become known for. It was great to hear their older songs reworked, as well as their forthcoming single 'Standing Still', which fitted their evolved sound and the live set up well.

Then it was time for Megan to take to the stage. I have only recently come across Megan thanks to a friends recommendation. We previously saw her at Victorious and I went home and listened through her previous EPs and kept an eye out for her single launch... and there we were!

Megan started her set solo and acoustic. It was really lovely to hear her earlier songs performed how they were written, stripped back and they showcased her vocals and lyrics perfectly. There was one song in particular that stuck with me from that particular section of her set, it was from her first EP and it encapsulated a struggle with mental health. 'Money Trees and Withered Leaves' included beautiful lyrics and the addition of a harmonica.

The band (Charles - guitar, Jack - bass, Kris - drums, and Gilly - vocals) were called on stage and the rest of the set flowed together seamlessly. Megan's vocals work beautifully with the band, both 'River Flow' and 'Beckon' are great songs. They are full of funky bass lines, awesome guitar and steady beats that come together to create Megan's unique sound.

Another song that particular stood out to me was 'Sister', Megan and her backing singer Gilly performed the song, it was stripped back and powerful. The vulnerability and rawness of the song shone through, I was left with a little shiver down my spine - really beautiful.
The band also performed a cover of 'House of the Rising Sun', which got the audience singing along straight away. It was a soulful rendition, and gave the band an opportunity to show off their talent with their instruments, solo's all round, and they were clearly having fun - which is always great to see! As someone cheered as they finished, they 'smashed it'!

Of course, they performed Megan's new single - it was the launch after all! 'A Purple Sky At Night' starts off stripped back and 'traditionally' folky, showcasing Megan's vocals and poetic lyrics. The track soon builds into the chorus with guitars, bass and drums coming together perfectly for an upbeat and catchy track. They finished the set with 'Tale For The Road', one of my current favourite songs, it's dark and has a great story to it (also Charles does a fantastic job with the guitar live...)

Shouts of 'one more' ensued and Megan stayed on stage, her and her guitar, and covered Laura Marling's 'I Speak Because I Can'. Stunning; it finished off and summed up the evening perfectly, intimate, inspiring and pretty incredibly.