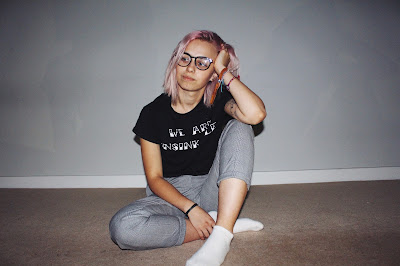 Charlie Wren is a 21 year old singer-songwriter, based in Guildford, UK. Over the past year she has performed at many open mic's and Music In Time events, and has more recently been focused on writing and finding her sound. Now, after working on her originals with David Waters (Pinc Wafer) in the studio, Charlie has created a unique indie pop sound. Her debut EP 'Inspired' has just been released, so we caught up with Charlie for a Q&A...

1. Who influences you musically and what inspires you lyrically?
I'm influenced by every musician I hear, there is always something to learn! But specifically, Lucy Rose, Daughter, Laura Marling and Bon Iver were massive influences growing up. My lyrics are definitely inspired by personal experience, just come naturally.

2. It hasn't been long since creating Charlie Wren to now releasing your debut EP, what made you release it now?
As simple as it sounds, I was inspired and had a mega rush on writing, it went from pen to paper so quickly and it felt like I finally found my sound. So I was eager to get it out there, hence the quick turnaround.

3. What's your favourite song from your EP 'Inspired' and why does it stand out to you?
This is such a difficult question, I really love the vulnerability of 'Shrug It Off' but the transformation of 'Getting By' really made me proud. There were moments I wasn't sure if it was going to make it because it's too wordy but the narrative shone through and I think it kicks ass.

4. What's your plan for 2018?
At the moment, my plan is to keep writing, hopefully new releases will be on the horizon but I'm mainly looking at getting myself out there to open mics and gigs.

5. What is one thing that you would like to change about the world?
Oh man, I would just like everyone to be seen as equal no matter what. I feel like if equality was embraced many more things would fall into place.

'Inspired' EP Review:
The EP opens with 'In Between', the lead track from the release, also accompanied by a brilliant music video. The listener is instantly pulled in by the atmospheric bass, light melody and catchy riff;  it's a dreamy track that builds into a hypnotic chorus. The song features many contrasts, which is highlighted with the video too. 'Getting By' starts with a stunning piano intro, growing with guitar whilst underlining the beautiful vocals and rawness of the lyrics. 'Inspired' has the catchiest chorus of them all, and cuts to gentle and vulnerable verses. It's a strong title track and it's one of my favourite songs on the release, thanks to the smooth vocals and skippy guitar. Charlie's vocals really shine through in 'Never Could Tell', they're powerful and emotion-filled, really bringing the lyrics to life. The EP ends with a live recording of 'Shrug It Off', the ticker and background noises add to the vulnerability of this song and put you in the room with Charlie. It's a raw and honest song, an open letter if you will. This one really showcases her songwriting and ability to tell a story. This is a brilliant debut release, I'm excited to hear future songs already.

In Between - Charlie Wren (link)