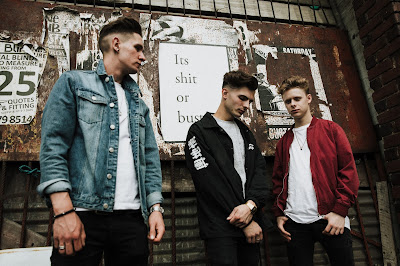 Formed in Banbury, Oxfordshire, Lake Acacia are an alternative rock band. Consisting of members, Adam Budd (lead vocals, guitar), Tim Groethe (bass guitar, backing vocals) and Joe Homer (drums, percussion, backing vocals). They officially formed in July 2016 whilst writing music and planning for their debut EP 'Figure Frame' which was released on 22nd September 2017. They have plans to tour the UK and have already been working in the studio for a second EP to be released in 2018...

1. How did 'Lake Acacia' come about?
Joe and I were fannying about with various covers bands and writing some pretty heavy music for a while whilst growing up and kind of ended up with Lake Acacia as a result of all that. The name was a result of putting some 'cool' words together until we got something we liked but I think it's also a place you can go in Pokemon? Things got a bit more serious when Tim joined permanently after filling in for us at a gig at the last minute and now we've come as far as releasing an EP and we've already got another one on the way. We gel pretty well as people and we've been in our fair share of unusual situations since forming this lineup...

2. What was your favourite track to create from your EP 'Figure Frame' and why?
'Self Restraint' was a really fun track to record, the dirt was real. That song is usually pretty rowdy live too because it's just so filthy. Another cool one to create was 'Hold Fast' just because of how long it was in the works and how much it developed over time. I think we recorded 4 or 5 different versions of that over the years? Safe to say we're glad it's finished.

3. Who influences you musically and what inspires you lyrically?
We've definitely got roots in progressive metal and rock although the band takes on a sound more like Muse or Biffy Clyro with a few bits and pieces borrowed from other genres that we've thrown in there too. As for lyrics I ended up writing a couple of tracks from Figure Frame as a way of dealing with some issues I had been having at home although the EP generally deals with the struggles the average person has to overcome on a daily basis in order to reach their goals and we all had some input on that.

4. You have plans for a UK tour following your EP release, but where in the world would you most like to tour and why?
I know that Tim really wants to tour America because it would be a huge milestone for the band and he has some relatives there too. For me and Joe it's gotta be Japan purely because of how different and weird it is as a country and there's some cool culture there too. Plus the crowds seem pretty nutty!

5. Would you rather have feet for hands or hands for feet?
I think we're all for hands for feet there, I don't think we could play too well with 6 pairs of feet but having 12 hands between us? You could make some pretty sick music with that...

'Figure Frame EP' Review:
The EP opens with 'Hold Fast', a track that sets the scene and pace for what's to come. The melodic harmonies provide a chilling atmosphere alongside the choppy instrumentation. The guitar of 'You Will See' follows on well from the previous track creating a definite 'Lake Acacia' sound. There's a more choral vocal backing the lead in this song, building a well layered track. 'Ask Me Again Tomorrow' is a steadier song, with break downs into gentle lullaby state interludes, building straight back up into a catchy upbeat tempo. Closing the EP is 'Self Restraint', an instantly heavier and thicker sound, with the contrast of an almost funky bass. From this track in particular you can hear their influences of heavier musicians, this is shown with the lead vocals versatility as he growls and screams. This EP is full of power, passion and personality.


You Will See - Lake Acacia (link)