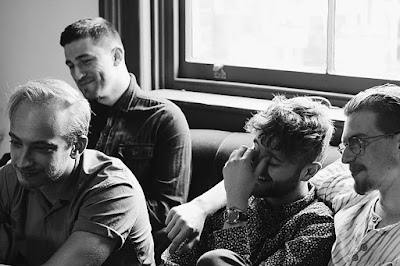 Originally, a passion project of singer-songwriter/guitarist Jack and drummer/muti-instrumentalist Luke. Peace Worm has evolved over the past two years; after releasing their debut self-titled EP in 2018, Alex joined on bass to bring their live set to life. Having taken time out to write and record, the second EP was then ready in time for Josh to get involved on guitar and backing vocals. ‘Got A Light, Handsome?’ follows the familiar alternative rock (renamed bog rock) vibe from their debut EP, and was released earlier this month. They will also be taking to the stage for some acoustic sets following the release over the winter months. We caught up with Jack, Josh and Alex for a quick Q&A...

1. Which song is your favourite from, 'Got A Light, Handsome?', and why does it stand out to you?
Jack: I think I'd have to say 'Beauty Behold'. A song I wrote about my childhood, being taken to see trains go under me on the train bridge in the town I grew up, so I could wave at the driver. Sorta growing up from there and gradually losing your innocence. It'd riddled with good and bad memories. It's difficult though as all the songs mean a lot to me and all have personal reasons to be attached to them but I think it's simply because it's been with me the longest.

2. If you could tour with two other bands/artists (dead or alive), who would you choose and why?
Alex: We'd be happy to support anyone but it'd be a bit of a band dream to open for Weezer, and Manchester Orchestra would be a bit personal dream for me.
Josh: Ohh good question. Two very different answers from me. John Mayer is my idol (not very rock and roll) but I'd love to watch him play and just learn! Secondly, Biffy Clyro put on an amazing show every time and it never gets old. It'd be amazing to be affiliated with the best British band going at the moment!

3. Where in the world would be your dream place to do a live recording?
Jack: Okay, who wouldn't want to record in a volcano? That's just every boys dream no? It'd probably be that, or maybe on the moon in some sci-fi dome with a neat view of Earth. I say cave could be a close second though for a warm ambient recording.
Josh: The arctic would be cool... (get it?)
Alex: The Wisconsin cabin that Bon Iver recorded his first album.

4. What are your plans for 2020?
Jack: 2020 is looking to be a highly productive start to the new decade. New releases, new songs to be written and a lot of gigging to come. We'll be starting our live acoustic sessions and performing them around the local area too, which will be a bonus for us and hopefully for you as well. All dates will be on our website as they happen!

5. Invent a pizza... What would it be called and what would be on it?
Alex: 'Bone by Bone', the first non-boneless pizza.
Josh: Any kind of meat, but that really expensive lab grown stuff from actual animal cells. I'd call it the reluctant vegetarian...

'Got A Light, Handsome?' EP Review:
The EP opens with a punchy and catchy track, that has understandably gained support from Peace Worm's local radio station. 'Here She Is' sets the tone for the rest of the EP, with the guitar steadily growing into a contagious chorus, that you will instantly be singing along to. The groovy bass line in 'The Producer' stands out alongside the funky guitar riffs; growing to smash and thrash their way into the heavier chorus out of the four tracks. Jack's songwriting really shines through on 'Beauty Behold', a cinematic story backed by Peace Worm's trademark guitar, bass and drum combo. 'Normal' is a song of two halves, and ironically quite the opposite of any 'normal' song. It seems to showcase all that they stand for and create. Contrasting heavy guitar-led rock with smooth and melodically trippy sections; as well as electronic versus acoustic. This is what they mean by bog rock! 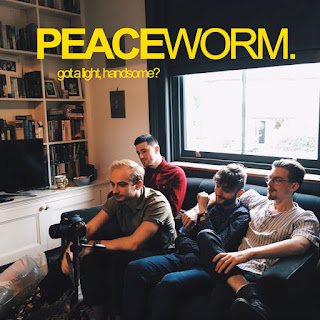